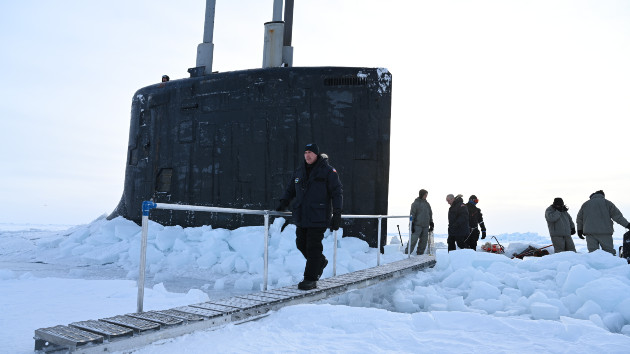 (NEW YORK) — Amid growing tensions and changing geopolitics in the Arctic, the U.S. Navy kicked off Ice Exercise (ICEX) 2022, a three-week exercise focusing on research, testing and evaluation of operational capabilities in the region.

Despite the temperatures at the Arctic being below freezing, the region is one of the fastest warming places on the planet as a result of global warming. The melting ice makes the region more accessible, putting Russian nuclear and conventional naval forces even closer to the U.S. border.

To test submarine systems and research initiatives in the region, the Navy established a temporary ice camp, known as Ice Camp Queenfish, on top of an ice floe in the Arctic Ocean.

“The Arctic region can be unforgiving and challenging like no other place on Earth,” Rear Adm. Richard Seif, ranking officer of ICEX 2022, said in a press release.

“ICEX 2022 provides the Navy an opportunity to increase capability and readiness in this unique environment, and to continue establishing best practices we can share with partners and allies who share the U.S.’s goal of a free and peaceful Arctic,” he said.

The camp consists of shelters, a command center and infrastructure to house over 60 personnel, according to the press release.

Under the ice and amid freezing temperatures, Navy divers and two American submarines, the USS Pasadena and USS Illinois, train in launching torpedoes as well as finding and evading enemy submarines.

When the torpedoes are shot, the search and recovery team go under the ice to find them. Once located, a hole is drilled over the ice, and the team begins to recover the torpedo.

The USS Pasadena, a Los Angeles class fast attack submarine with a steel reinforced sail, allows it to punch up through Arctic ice as thick as 5 feet or more. The Pasadena can be equipped with up to 20 torpedoes.

“I’m not concerned about really any threat. We are ready as a submarine force. We’ve all executed orders as directed by our civilian leadership” he told ABC News. “And we are postured and ready as always.”

“We continue to watch [Russia] every single day. We are on the frontlines. We are unseen,” Houston added. “And that’s a good thing. Because the adversary, any adversary, doesn’t know where we’re at. And that’s the key about the Submarine Force. It is the ultimate silent service. We’re exceptionally stealthy, and we’re watching all the time.”

As temperatures rise, scientists will travel to the far northern region to work in conjunction with the Navy in studying the cracking and melting Arctic ice.

The camp, located 160 miles away from land, honors the first Sturgeon-class submarine to operate under ice — the USS Queenfish (SSN-651).

With ICEX 2022 underway, the Navy is confident it is ready for any potential threat.

“We have the largest nuclear submarine force in the world,” Houston said. “You have unprecedented mobility where you don’t need to come to the surface and you can stay submerged for as long as you want. Any adversary doesn’t know where we’re at. We’re exceptionally stealthy, and we’re watching all the time.”

Scorching, global drought has uncovered lost artifacts around the world

Secretary Blinken to arrive in Congo, Rwanda amid international tensions