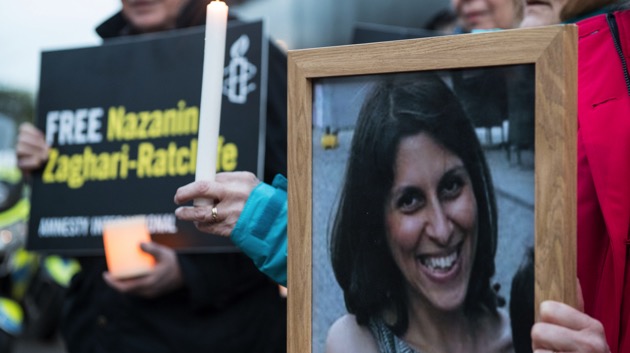 (LONDON) — Nazanin Zaghari-Ratcliffe and Anoosheh Ashoori, dual British-Iranian nationals detained in Iran for years, have been freed and are on a plane headed to the U.K., Prime Minister Boris Johnson said.

Tulip Siddiq, Zaghari-Ratcliffe’s lawmaker in the U.K., tweeted a photo of the freed woman from her flight.

“I am very pleased to confirm that the unfair detention of Nazanin Zaghari-Ratcliffe and Anoosheh Ashoori in Iran has ended today, and they will now return to the U.K.,” Johnson tweeted on Wednesday. “The U.K. has worked intensively to secure their release and I am delighted they will be reunited with their families and loved ones.”

Zaghari-Ratcliffe’s long spell in detention began when she was arrested on charges of espionage in April 2016 on a visit to see family in the country.

Her detention drew international condemnation, and her husband, Richard, led the calls back home for her release, going as far as a hunger strike outside the U.K. Parliament in October of last year to compel the government to do more.

Ashoori was arrested in August 2017 when he was visiting his mother in Tehran. He said he was arrested by plain clothes intelligence agents on a street near his mother’s home, according to Amnesty International. He was then forced into their car and was driven, blindfolded, to an unknown location, the group said.

For years, Islamic Republic officials denied they were keeping Zaghari and Ashoori as bargaining chips to compel the U.K. to unfreeze millions of dollars linked to a decades-long debt, saying the judicial power is independent and the two issues should not be connected.

Families of Zaghari and Ashoori, however, had urged British officials to pay Iran’s debt.

Fars News confirmed that $520 million of Iran’s blocked assets were transferred to Iran’s account before the pair was released, although U.K. Foreign Secretary Liz Truss said the debt had been settled in a way that complies with international sanctions, with the funds released restricted to humanitarian uses.

Another British national, Morad Tahbaz, has been released from prison on furlough, Truss said, and the U.K. government will continue to work to secure his departure from the country.

Zaghari and Ashoori will be reunited with their loved ones later this evening, she said.

US sends message to Iran with counterattacks in Syria

A fatwa against author Salman Rushdie led to more than 30 years of terror: a timeline