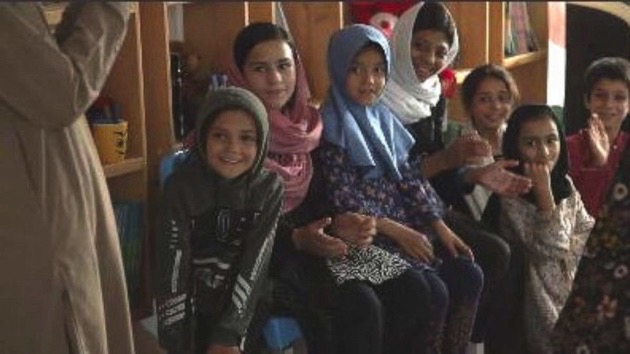 She says she felt uncomfortable in the clothes her older brothers lent her, but pulling the sweatshirt hood over her head could make her look more like a boy and help ensure her survival when she’s on the streets of Kabul.

As dusk falls, Zarlasht walks near a bakery storefront, but it will be another hour of work before she can buy a loaf of bread. She walks with two-plastic wrapped packets of watermelon-flavored gum, trying to sell pieces to anyone who passes.

Most will ignore her.

In the two years since she’s been working on the street, Zarlasht says she usually makes between $1-2 a day. She says she spends it at the bakery to feed her four siblings and parents who wait each night for her return.

“I am always scared going out to do some work,” she tells ABC News Chief Foreign Correspondent Ian Pannell, who spoke with Zarlasht through a translator and followed her as she navigated part of a day in her life in Kabul. While she says she hasn’t faced anything as dangerous so far, she fears of one day being kidnapped. “I don’t know what will happen,” she says.

Her father sells vegetables in a market, but doesn’t make enough money to feed the family. Her mother, Shahpari, suffered a stroke she says was caused by the explosive sounds of war. She says it left a side of her body partially paralyzed and while some movement has returned, she claims she is unable to work. Shahpari explained that while her other children assist their mother throughout the day at home, Zarlasht, the youngest, is tasked with finding money for food on the street.

The young girl is not alone. UNICEF estimates that there are 60,000 street children in Kabul, alone. Thousands more were forced out of their homes in the days following the Taliban takeover. They walk the streets, desperate for money and food as the stranglehold on the national economy tightens.

Malnutrition can lead to frailty, but also an inability to sleep, focus, study, and stay motivated. UNICEF expects that international humanitarian food assistance could decrease from reaching 38% of the Afghan population to only 8% in the next few months, warning that 1.1 million children in the country could die this year due to lack of food if there is not serious intervention.

In Kabul, a local cafe offers a rare refuge for kids working on the streets.

Salam Cafe provides ice cold water and free, nutrient-rich meals three times a day to at least 45 Afghan street kids who are a part of the Hospitality for Humanity program.

For Zarlasht, it allows for a desperately needed reprieve during her day. Taking a break from selling watermelon-flavored gum on the street, she can eat thick slices of watermelon with other people her age.

The few rooms have become a clean and safe space where Afghan street working children can more comfortably be themselves. Kids draw and leaf through picture books. Instead of competing for spare change on the traffic-congested streets, the boys and girls sit together and play rock-paper-scissors.

In the cafe, teachers also lead classes to practice writing, reading, and other skills at a time where many girls in the country have been unable to attend formal school for close to a year.

“They have big dreams,” the co-director of Salam Cafe, Salma Aslami, says of the children she works with. “Many of them told me I wish I become I the future a good engineer, teacher, doctor.”

Instead, she says they “are being tortured.” She assesses the situation is only getting worse.

Funds for the cafe are being depleted. If its doors close, aid workers say the kids might only be able to receive up to one meal a day elsewhere. Aslami says they can already face severe abuse on the streets.

While just this month the Supreme Leader of the Taliban has ordered to take beggars off the streets and offer jobs or education, Aslami hasn’t seen a difference. “They will pay them a salary, but nothing has been done yet,” she claims.

“I don’t know how long more we will face this kind of difficulties,” Zarlasht admits. “I wish to have better life and get out this kind of life. We have bad life.”

While the cafe has been a safe space for her, the demanding work is still waiting for her once she steps outside its walls. The bakery she sells gum outside of is only a 10-minute walk away.

With the few dollars she makes a day, Zarlasht hopes to make enough money to someday also pay for her mother’s medicine. Despite recent attacks by the Taliban on girls’ access to education, she says she aspires to become a doctor.

“I want to get rid of these problems,” she says.

Until then, she says she may be forced to remain out on the streets, wandering through passersby, waiting for others to look down and notice.

Media freedom safe in Ukraine despite the war, officials say

What to know about Princess Anne’s royal title, and why her 2 kids don’t have one