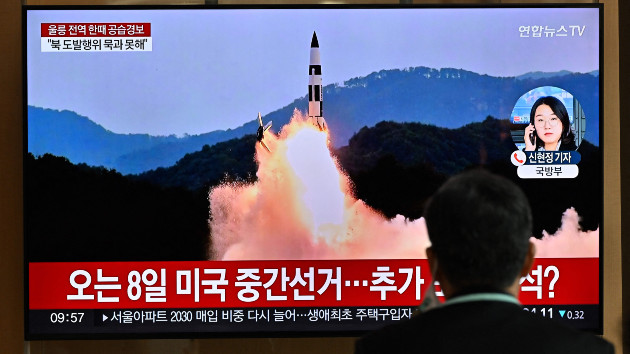 (SEOUL, South Korea) — North Korea test-fired six missiles on Thursday, a day after launching its most tests in a single day.

Authorities said they were still analyzing the details. Analysts suggested that the missile, which flew 472 miles and reached a height of 1,200 miles, was presumably an intercontinental ballistic missile that failed.

Three more short-range ballistic missiles were launched Thursday night, according to the South Korea Joint Chiefs of Staff. The missiles were fired toward the eastern seas from North Hwanghae province between 9:35 p.m. and 9:49 p.m. local time.

“We can sense North Korea’s anxiety from recent launches. In fact, these missile launches are a huge burden for their military, especially when North Korea is so economically cut off,” Park Won-gon, professor of North Korean Studies at Ewha Womans University, told ABC News.

The provocations are a typical brinkmanship tactic to either bring the U.S. and South Korea into nuclear talks or a prelude to justifying an imminent seventh nuclear underground test.

“It’s possible to assume that North Korea will decorate the grand finale of its tactic with the seventh nuclear test, and then suggest a deal,” said Park.

The two Koreas test-fired missiles one after another throughout Wednesday in a series of tit-for-tat moves. North Korea fired a total of 23 missiles that were a combination of ballistic and surface-to-air weapons, and 100 artillery shells from various locations toward the east and west. In a retaliatory move, South Korea quickly responded in between by launching its own air-to-surface missiles into a similar area above the NLL, launched by two F-15K and KF-16 jet fighters.

Pyongyang claimed the missile tests are “self-defensive” in nature. Officials called for the U.S. and South Korea to stop their annual joint military drills, which they said were “aggressive and provocative.”

“They are going on a full-scale sprint. Not only are there a variety of missiles, but also a great number of them,” Park added.

“It’s an adamant statement that they will respond with all forces by fully mobilizing all the means they have,” Yang explained.

South Korea’s air force announced Wednesday shortly after North Korea’s ballistic missile provocation, that the joint air drill between the U.S. will be extended. It was originally planned for five days from Oct. 31 to Nov. 4.

Will US Patriot missiles really be a game changer in Ukraine?