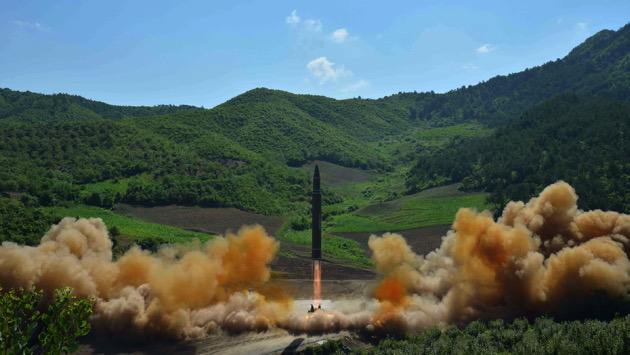 (PYONGYANG, North Korea) — North Korea launched a long-range missile with its highest peak yet on Thursday, marking a full return to its dark days of saber-rattling and a critical step in its mission to perfect the nuclear weapons program that has made it an outlaw state.

The missile, which analysts say is capable of reaching the entire United States, presents another foreign policy challenge for President Joe Biden, already facing crises on multiple fronts, including Russia’s war on Ukraine and negotiations over Iran’s nuclear program.

The launch, the twelfth this year, is the first intercontinental ballistic missile launch that demonstrated a long range since 2017 when North Korea test-fired two ICBMs — sending this new missile over 3,700 miles in the air in a lofted trajectory.

The U.S. “strongly” condemned the launch as “a brazen violation of multiple UN Security Council resolutions and needlessly raises tensions and risks destabilizing the security situation in the region,” White House press secretary Jen Psaki said in a statement.

But with Biden in Europe to rally allies against Russia, it seems the world is largely distracted as North Korea makes further advances in its ballistic missile technology.

“Right now, the U.S. is going to be totally distracted. The Biden administration really has not lifted a finger to begin negotiations” with North Korea over dismantling its nuclear weapons program, said retired Marine Col. Steve Ganyard, an ABC News contributor and former State Department and Pentagon official.

Repeated attempts by the Biden administration to start negotiations with Pyongyang have been met with silence. Last fall, North Korea’s strongman leader Kim Jong Un said that U.S. outreach was “nothing more than a façade to mask their deception and hostile acts” and has instead turned inward as North Korea struggles with an economy crippled by sanctions and COVID-19 restrictions.

But rather than ease the suffering of the North Korean people, Kim’s regime continues to pour funds and energy into an expanding nuclear weapons program that it sees as a guarantor of its security. This year alone, North Korea has now tested 12 missile tests — tying a record for the most in one month in January — but Thursday’s was perhaps the most significant to date.

“It’s a massive missile … [that], if the kilometric data proves out, can reach any point in the United States,” Ganyard said. “Kim knows that the world is distracted, and so what better time to test a very, very provocative and destabilizing missile.”

According to the Japanese Ministry of Defense, the missile launched from North Korea’s west coast, heading east and high. It flew for approximately 71 minutes, landing in the waters of Japan’s exclusive economic zone, which Tokyo sees as a direct threat. It flew an estimated 684 miles to a maximum height of 3,728 miles — marking the highest apogee yet for a North Korean launch.

That high launch is meant to keep the missile from directly flying over an adversary like Japan or even an ally like Russia, given the risk that would pose.

Analysts are still studying the launch and determining what kind of missile it was, but it may be the same one North Korea paraded out in October 2020 to much fanfare.

Either way, “you can interpolate this [data] and accurately predict this missile can range all of the land mass of the continental United States,” said ret. Gen. Robert Abrams, an ABC News Military Contributor and former commander of U.S. Forces Korea.

“I’d say now there is no doubt,” Abrams added, that North Korea could strike anywhere in the U.S.

Still, key questions remain about that capability, including whether the missile has the ability to integrate a nuclear warhead that can survive reentry and strike accurately, according to Abrams.

But he added, “It is certainly within their grasp, I would say.”

That marks a new step in Pyongyang’s quest to perfect its nuclear missile program. But the White House seemed to downplay the significance, pointing to two other ICBM tests earlier this year and declining, so far, to call it an ICBM, like South Korea and Japan did.

On Feb. 26 and March 4, North Korea conducted ballistic missile tests that the U.S. later concluded involved a new ICBM system — the same one believed to be used in Thursday’s test.

But those launches did not demonstrate the same long range that the missile is capable of, “likely to evaluate this new system before conducting a test at full range in the future,” the Pentagon said at the time.

That future may have arrived Thursday.

Beyond statements of condemnation from the White House, State Department, and Pentagon, it’s unclear what the Biden administration will do about it — or even can.

North Korea is already under heavy U.S. and U.N. sanctions, although some analysts argue more could be done. Further action at the U.N. Security Council is all but guaranteed to be blocked by North Korea’s allies China and Russia, and Pyongyang continues to reject diplomacy.

“As a matter of policy, are we okay with North Korea having an ICBM that is nuclear weapon capable that can range any U.S. city or not?” said Abrams.