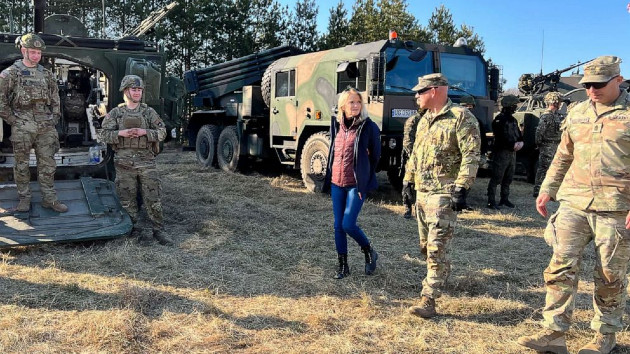 (NEW YORK) — The silence of the Polish countryside is shattered by the piercing rattle of heavy artillery fire.

A smokescreen obscures the horizon, and suddenly, the soldiers swarm. Moving in on armored vehicles, in helicopters, and atop assault watercraft, more than 2,000 soldiers combine to form a united front on the battlefield against an imagined enemy.

This is a NATO exercise — preparation in case these troops are called upon to defend the alliance’s territory. While it’s a scenario that once seemed unthinkable, here, just 10 miles from the Belarusian border and against a geopolitical backdrop dominated by rapacious Russian aggression, this is more than just a drill.

“It’s a show of force,” Lt. Karol Frankowski of Poland told ABC News, adding that Belarus, Russia’s staunchest ally, is likely watching over them via aircraft or drone.

Soldiers from Poland, Croatia, Romania, the U.K. and U.S. make up the battle group, one of four that received a surge of manpower to defend the eastern front in response to Russia’s invasion of Ukraine. Their American commander, Lt. Col. Trevor Phillips, said today’s practice feels “absolutely” different, colored by the crisis.

“It’s difficult to watch and not be able to do anything about it. We’re direct action type people. Our whole motto while we are here is ‘stronger together,"” Frankowski said. “No nation should stand alone. That’s why this is so important to us.”

Even the objective of the practice is shaped by the warfare in Ukraine. The scenario — troops facing off against rival forces who attempt to barricade a bridge — recreates the challenges of modern warfare, officials said.

“The idea is to destroy the enemy and make free passage for the troops,” Col. Piotr Fajkowsli, the leader of the Polish brigade, told ABC News.

ABC News’ Martha Raddatz asked Fajkowsli if he believed Russia would ever strike inside his homeland’s boundaries.

“Anything can happen,” said Fajkowsli, saying that not long ago, the thought of Russia descending on Ukraine with such brute force would have been considered by most to be “impossible in the 21st century.”

“Now we can see destroyed towns burning. It is crazy,” he said.

“We do believe Russian aggression in Ukraine shows a willingness by the Russians to disregard international borders and to disregard the basic rules of the road of the international community that have been built in sustained over the course of seven decades,” he said.

Fajkowsli said they are ready to face anything the opposition throws at them. The people he is sworn to protect are a different story.

“We as soldiers are ready to fight against chemical weapons. We have protective gear. The civilians, they don’t,” he said. “This is the danger.”

After the bridge is won, the troops break. With the day’s mission completed, they stand temporarily at ease. They will convene again tomorrow to once again play out these war games that now seem all too real.

Across the border from Uvalde, anger, sorrow, calls to action in Mexico after another US mass shooting