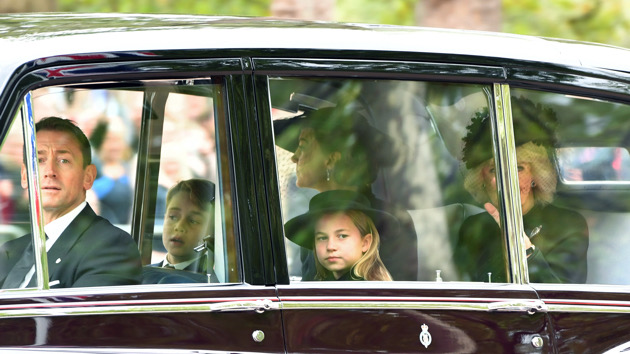 (LONDON) — Among the thousands of mourners attending the funeral of Queen Elizabeth II are two of her beloved great-grandchildren.

Prince George and Princess Charlotte, the eldest children of Prince William and Kate, the Princess of Wales, joined their parents Monday at Westminster Abbey.

George, 9, and Charlotte, 7, were seen walking into the church with Kate, while William joined the procession escorting the queen’s coffin to the service.

The siblings then joined the procession at Westminster Abbey, walking in between William and Kate and their uncle and aunt, Prince Harry and Meghan, the Duchess of Sussex.

George and Charlotte are the only great-grandchildren attending the funeral.

Missing from the funeral will be their younger brother, 4-year-old Prince Louis, and their cousins, Archie, 3, and Lilibet, 1, the children of Harry and Meghan.

The queen’s other great-grandchildren include Savannah Phillips, 11, and Isla Phillips, 10, the daughters of Peter Phillips, the queen’s eldest grandson and the son of Anne, the Princess Royal; the three children of Phillips’ sister Zara Tindall, Mia, 8, Lena, 4, and Lucas, 1; the 1-year-old son of Princess Eugenie of York; and the 1-year-old daughter of Princess Beatrice of York.

The queen, who was known as “Granny” and “Great-Granny” by her grandchildren and great-grandchildren, was beloved by her family.

In their remembrances of the queen, royal family members have spoken of the time she spent with them outside of the spotlight.

“Granny, while this final parting brings us great sadness, I am forever grateful for all of our first meetings—from my earliest childhood memories with you, to meeting you for the first time as my Commander-in-Chief, to the first moment you met my darling wife and hugged your beloved great-grandchildren,” Harry said in a statement. “I cherish these times shared with you, and the many other special moments in between.”

William, now the heir to the throne, said in a statement he was thankful his three children, ages 9 to 4, got to spend so much time with their great-grandmother.

“And while I will grieve her loss, I also feel incredibly grateful. I have had the benefit of The Queen’s wisdom and reassurance into my fifth decade,” William said. “My wife has had twenty years of her guidance and support. My three children have got to spend holidays with her and create memories that will last their whole lives.”

“Sophie and I have taken huge pleasure in seeing our James and Louise enjoying the places and activities that their grandparents loved so much,” he said. “Given that my mama let us spend so much time with her, I think she also rather enjoyed watching those passions blossom. Those times together, those happy memories, have now become massively precious to each and every one of us.”

The queen was known to have her youngest family members visit her while she spent summers at Balmoral Castle in Scotland and Christmases at Sandringham, her country estate in Norfolk, England.

Most recently, in June, at the celebration of her Platinum Jubilee, the queen’s interactions with William and Kate’s son Louis, stole the show.

The queen was seen pointing things out to her great-grandson, 92 years her junior, and answering his questions as they watched the Trooping the Colour parade from the balcony of Buckingham Palace.