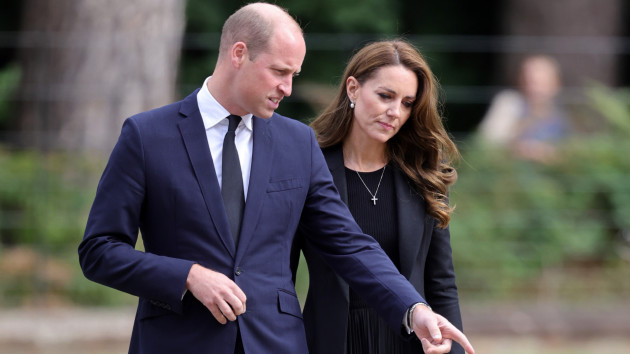 (LONDON) — Prince William and Kate, the princess of Wales, made a trip to Norfolk, England, Thursday to view tributes left to Queen Elizabeth II, who died Sept. 8 at the age of 96.

William and Kate viewed floral tributes left by the public outside Sandringham Estate, the queen’s Norfolk retreat, where she and family members regularly spent time, including a decadeslong tradition of gathering there for Christmas.

The couple have their own ties to Norfolk, which is where they have their country home, Anmer Hall, where they spend down time as a family with their three children, Princes George and Louis and Princess Charlotte.

Norfolk is located around 100 miles from Windsor, England, where William and Kate now have their primary home on the grounds of Windsor Castle, where the queen also spent much of her time during her 70-year reign.

William and Kate’s visit to Norfolk came after an emotional day Wednesday when they joined other members of the royal family in a procession escorting the queen’s coffin from Buckingham Palace to Westminster Hall, where it will lie in state until her funeral on Sept. 19.

Thousands of people have lined up in London to pay their respects to the queen, Britain’s longest-reigning monarch.

The queen’s daughter Anne, the princess Royal, traveled to Glasgow, Scotland, to view tributes left to the queen and to meet with representatives of organizations of which the queen was patron.

And tributes like those William and Kate viewed at Sandringham have grown across the U.K. in the week since the queen’s death.

Anne traveled with her mother’s coffin earlier this week on its journey from Balmoral Castle in Scotland, where the queen died, to London.

Prince Edward, the queen’s youngest child, and his wife Sophie, the countess of Wessex, spent time Thursday in Manchester, England, where they viewed tributes left at St. Ann’s Square and met with community members.

Members of the royal family and invited guests will gather on Monday for a final goodbye to the queen.

Her state funeral is scheduled to begin at 11 a.m. local time Monday at Westminster Abbey, making the queen the first sovereign to have a funeral there since 1760.