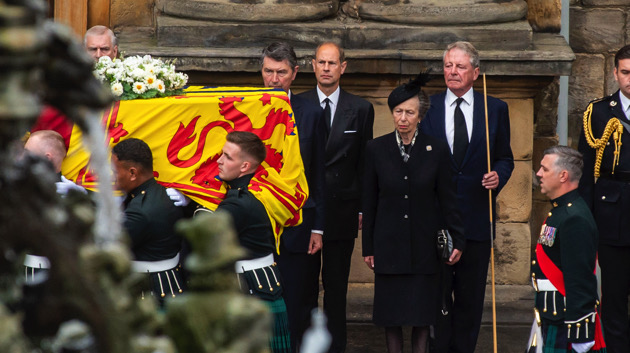 (LONDON) — As Queen Elizabeth II made her final journey home to London, by her side the entire way was Anne, the Princess Royal, her only daughter.

Anne, the second eldest of the queen and Prince Philip’s four children, was with the 96-year-old queen when she died Sept. 8 at Balmoral Castle, her retreat in Scotland.

Anne, 72, stayed at Balmoral Castle while her older brother, King Charles III, traveled to London to fulfill the duties of his accession to the throne.

On Sunday, Anne and her husband, Sir Timothy Lawrence, were part of a very small convoy that escorted the queen’s coffin on a more than six-hour drive from Balmoral to Holyroodhouse Palace in Edinburgh.

Anne was photographed curtseying to her mother’s coffin as it arrived at Holyroodhouse.

The next day, Anne, dressed in military uniform, walked with her four siblings behind their mother’s coffin in a procession from the palace to St. Giles’ Cathedral, where it lied in rest for 24 hours to allow people in Scotland to pay their respects.

At the cathedral, Anne made history by joining Charles and her two other brothers, Princes Andrew and Edward, in holding vigil at their mother’s coffin.

The tradition, known as Vigil of the Princes, had previously been carried out by male-only royal family members, making Anne the first female member to take part.

On Tuesday, Anne flew with her coffin from Edinburgh to London, where it will be taken first to Buckingham Palace and then to Westminster Hall, where the queen will lie-in-state until her funeral on Sept. 19.

Princess Anne watches as the coffin of Queen Elizabeth II is taken to a hearse as it departs St Giles’ Cathedral, in Edinburgh, Sept. 13, 2022.

The sight of Anne by her mother’s side on her final journey was a striking and fitting image given the close bond the princess was known to have shared with her mother.

In becoming a mom of two with her first husband, Mark Phillips, Anne gave the queen and Philip the first two of their eight grandchildren, Peter Phillips and Zara Phillips Tindall.

Like the queen, Anne is known for her love of horses, a passion that led to her competing in the 1976 Montreal Olympics.

Anne was the first member of Britain’s royal family to compete in the Olympics. She rode her mother’s horse, Goodwill, in the three-day equestrian event in Montreal, according to the royal family’s website.

In addition to sharing a passion for horses, Anne shared a devotion to royal service with the queen, who met with Britain’s new prime minister at Balmoral just two days before her death.

Because Anne was born as the only girl among three brothers, she was leap-frogged in the line of succession, where she is now 16th in line to the throne.

In 2013, a law called the Succession to the Crown Act ended the centuries-old practice of a younger son superseding an elder daughter in the line of succession, but the law only applies to royals born after Oct. 28, 2011.

Like the queen, Anne started her royal work at a young age — in Anne’s case at the age of 18 — and never stopped.

She is currently involved with over 300 charities, organizations and military regiments in the U.K. and around the world, according to the royals’ website.

Anne has also helped to create several charities, including The Princess Royal’s Trust for Carers, which supports caregivers in the U.K., and Transaid and Riders for Health, which each work to help people in developing countries by solving transportation difficulties.

When the queen began to reduce her workload in her later years, Anne stepped up her own duties even more, picking up engagements from the queen and in other cases joining her mom.

In one recent funny memory, Anne coached the queen on how to do a video call while working from home during the coronavirus lockdown.

“Can you see everybody?” Anne asked the queen, then 94, at the start of a June 2020 call with four carers during Carers Week in the U.K. “You should have six people on your screen.”

When the queen replied that she could only see four people on her screen, Anne replied with a laugh, “OK, fair enough. Actually, you don’t need me. You know what I look like.”

Now in the wake of her mother’s death and her brother’s accession to the throne, Anne is expected to continue her service as a senior working royal, joining Queen Camilla, Prince Edward and his wife Sophie, the Countess of Wessex, and Prince William and his wife Kate, the Princess of Wales, in building the next chapter of the monarchy.