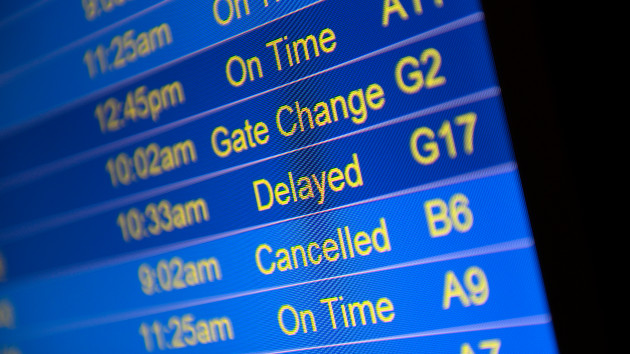 (LONDON) — About 15% of flights into and out of London’s Heathrow Airport will be disrupted on Monday due to Queen Elizabeth II’s funeral, the airport said.

The changes coincide with two minutes of silence that will be observed in the late queen’s honor throughout the U.K. near the end of the service at Westminster Abbey.

“As a mark of respect, operations to and from the airport will be subject to appropriate changes in order to avoid noise disruption at certain locations at specific times on Monday,” a Heathrow spokesperson said in a statement.

The airport will halt all departures and arrivals for 15 minutes before and after the two-minute silence, which will start around 11:55 a.m., as well as during the arrival of the funeral cortege and procession at Windsor Castle.

Additionally, departures will be reduced from 4:45 p.m. to 7 p.m. due to a committal service for the royal family and queen’s staff held at St. George’s Chapel, on the grounds of Windsor Castle.

Around 15% of Heathrow’s schedule will be altered — equivalent to a moderate weather event — as a result, particularly in the late afternoon and early evening. Airlines will need to change their schedules, “which will mean some changes to flights,” a Heathrow spokesperson said.

Passengers affected by any changes, including any cancellations, will be contacted directly by their airline about their travel plans and options.

“We apologize in advance for the inconvenience some passengers will experience as a result of these exceptional circumstances,” a Heathrow spokesperson said.

Roads around Heathrow also will be closed during the day due to the funeral. Travelers are encouraged to take public transportation to the airport.

Non-essential shops will be closed inside the airport on Monday, which will be a public holiday in the U.K. Essential retailers, such as WHSmith, Boots and Travelex, and restaurants, cafes and pubs, will remain open.