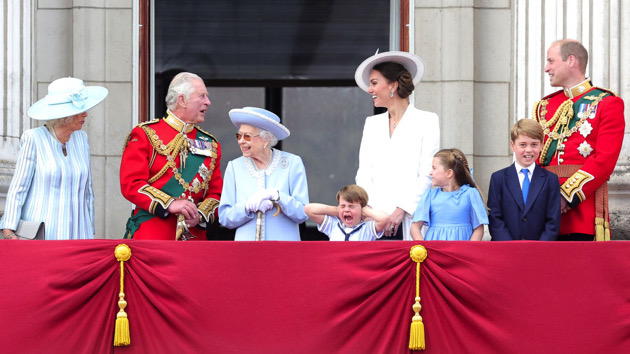 The 96-year-old queen is the first British monarch in history to reach a Platinum Jubilee, which marks 70 years on the throne.

Queen Elizabeth ascended to the throne on Feb. 6, 1952, following the death of her father, King George VI.

Starting Thursday, the Platinum Jubilee celebration will include everything from the traditional Trooping the Colour birthday parade for the queen to a star-studded concert led by Diana Ross to thousands of street parties across the country.

Here is how the news is developing Thursday. All times Eastern. Check back for updates.

The first lady added her own well-wishes. “Throughout the years, the joy your visits to the United States have brought Americans, and your solidarity with the American people in times of tragedy, have deepened the friendship and profound connection between our countries,” she said. “And Joe and I were so touched by the generosity and welcome you showed to us when we visited you at Windsor Castle last year, during our first visit overseas as President and First Lady.”

“Congratulations, Your Majesty, and have a wonderful Platinum Jubilee celebration,” she added.

They are 92 years apart in age, but Queen Elizabeth, 96, and her great-grandson, Prince Louis, 4, appear to share a close bond.

The queen was seen answering Louis’s questions and pointing things out to him while the two watched military jets fly overhead on the balcony of Buckingham Palace at the end of Trooping the Color.

Louis, one of the queen’s nine great-grandchildren, is the youngest child of Prince William and Kate, Duchess of Cambridge.

He joined his siblings, Prince George and Princess Charlotte, on the balcony and, earlier, in a carriage to travel to Buckingham Palace.

Britain’s royal family, led by Queen Elizabeth II, gathered on the balcony of Buckingham Palace to watch a traditional military flypast at the end of Trooping the Color.

Thanks in part to a weather-cooperating, beautiful sunny day in London, aircraft from the Royal Navy, British Army and Royal Air Force were able to fly directly down the length of the Mall and over the palace.

The queen, wearing sunglasses, watched the flypast with other members of the royal family, including Prince William and Kate’s children, Prince Louis, Prince George and Princess Charlotte, who were seen talking with the queen.

Down below the balcony, outside the palace gates, thousands of members of the public gathered to see the queen and watch the flypast, which is so fierce and low that onlookers say they can feel the ground rumble.

Queen Elizabeth II is holding court on the balcony of Buckingham Palace, where the royal family gathers to watch the military flypast at the end of Trooping the Color.

This year, the queen decided only royal family members who are “undertaking official public duties” on her behalf would appear on the balcony.

Those family members include:

Noticeably absent from the balcony this year because they are no longer senior working royals are the queen’s son, Prince Andrew, and her grandson, Prince Harry, and his wife Meghan, Duchess of Sussex.