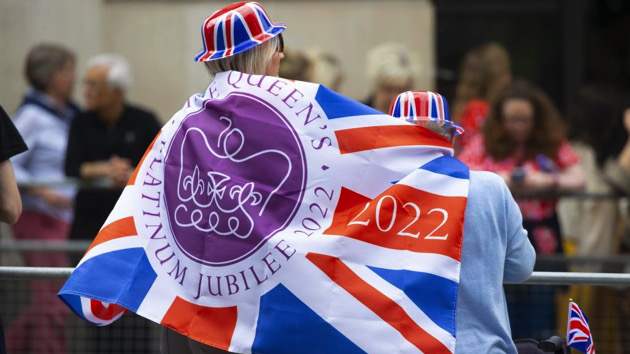 The 96-year-old queen is the first British monarch in history to reach a Platinum Jubilee, which marks 70 years on the throne.

Queen Elizabeth ascended to the throne on Feb. 6, 1952, following the death of her father, King George VI.

Starting Thursday, the Platinum Jubilee celebration will include everything from the traditional Trooping the Color birthday parade for the queen to a star-studded concert led by Diana Ross to thousands of street parties across the country.

Here is how the news is developing Fridayday. All times Eastern. Check back for updates:

Queen Elizabeth II will be absent from a second Platinum Jubilee event after missing Friday’s National Service of Thanksgiving at St. Paul’s Cathedral.

The 96-year-old queen, who is marking 70 years on the throne, will not attend the Epsom Derby on Saturday, Buckingham Palace has confirmed.

The queen is instead expected to watch the horse race on television at Windsor Castle, according to the palace.

Elizabeth attended Thursday’s Trooping the Color and a beacon lighting ceremony later that night, but decided not to attend Friday’s service after experiencing “some discomfort” during previous events.

The palace has previously said the queen suffers from “episodic mobility problems.”

Jun 03, 7:25 am
The royal family head to Guildhall after service at St. Paul’s

The National Service of Thanksgiving has concluded after nearly an hour.

Following the service, the bells at St. Paul’s Cathedral will be rung for a continuous four hours with no breaks in between.

According to a press release, members of the St Paul’s Cathedral Guild of Ringers “will ring ‘Stedman Cinques"” and “will be joined by Great Paul, the largest church bell in the UK,” which weighs in at more than 16 tons.

The Great Paul bell was restored in 2021 and this will be the first time it has been rung for a royal occasion.

Prince William and Kate, the Duke and Duchess of Cambridge, have entered St. Paul’s Cathedral to attend the service.

Several minutes after their arrival, Prince Charles, the heir to the British throne, and his wife Camilla, Duchess of Cornwall, also made their way into the central London cathedral.

Once inside the cathedral, Charles and Camilla joined William and Kate to form a royal procession before they took their seats for the service.

Prince Andrew’s children, Princess Beatrice and Princess Eugenie, as well as their husbands, Edoardo Mapelli Mozzi and Jack Brooksbank, were also in attendance.

The royal family is attending the National Service of Thanksgiving — which includes Bible readings, prayers and hymns intended to give thanks for the queen’s 70-year reign — without Elizabeth herself. Buckingham Palace announced Thursday that the queen would not attend in person after experiencing “some discomfort” at the Trooping the Color parade earlier in the day.

Prince Harry and Meghan, the Duke and Duchess of Sussex, have arrived at St. Paul’s Cathedral, marking the first time the couple has appeared publicly with the royal family in two years.

For the occasion, Meghan wore a white belted coat dress, matching hat and gloves, and Harry wore a tailored black dress jacket featuring his military medals and pinstripe pants. They were greeted by a guard of honor and then the Very Reverend Dr. David Ison on the cathedral’s western steps.

The Sussexes stepped down from their roles as senior working members of the royal family in 2020 and later moved to California, where they live with their two children.

The couple watched the Trooping the Color parade Thursday alongside other royal family members at Buckingham Palace, but did not appear publicly.

Jun 03, 5:45 am
What to watch as royals head to church on day 2 of Platinum Jubilee celebrations

The British royal family and more than 400 invitees — including government and faith leaders, teachers, military members, and COVID-19 frontline workers — are gathering at a National Service of Thanksgiving to celebrate Queen Elizabeth II’s 70 years on the throne.

The 96-year-old queen will not attend the service after experiencing “some discomfort” at Thursday’s Trooping the Color parade, according to Buckingham Palace.

Other senior royals are expected to attend, including three of the queen’s four children — Princes Charles and Edward and Princess Anne. The queen’s son, Prince Andrew tested positive for COVID-19 and will not attend, a royal source told ABC News.

The service — led by the Very Reverend Dr. David Ison — is being held at St. Paul’s Cathedral in London, which also hosted services for the queen’s Silver, Golden and Diamond Jubilees.

The service will include readings from the Bible, prayers and hymns that will “give thanks for the Queen’s reign, faith and lifetime of service,” according to the palace.

The Royal Marines’ band and trumpeters from the Royal Air Force and the Household Cavalry, which also performed at Prince Philip’s funeral, will play before and after the service.

A new song, titled “By Wisdom” and composed for the Platinum Jubilee, will also be performed.