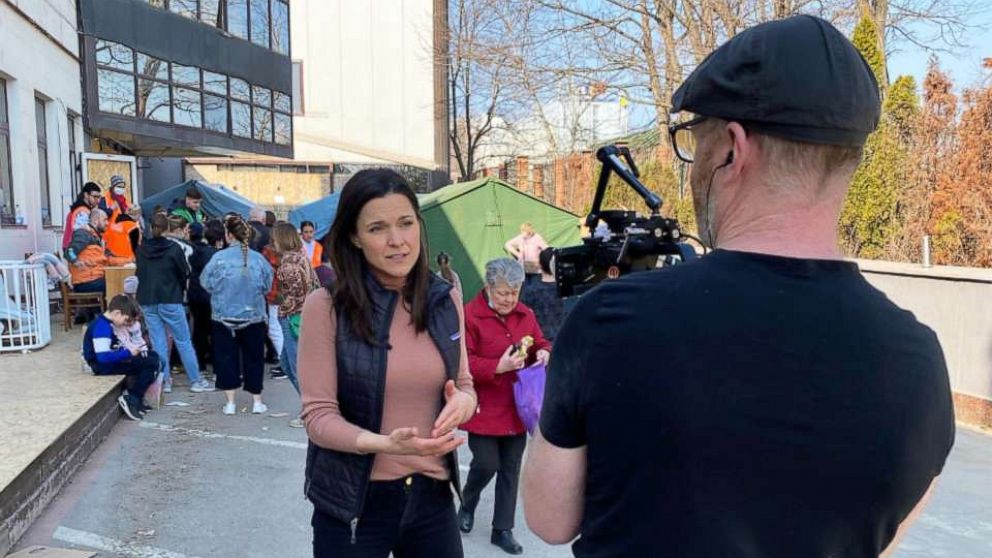 (LONDON) — Our team spent five days tracing the southern border of Ukraine. We drove more than 650 long miles through the big open, empty lands and packed small towns of Slovakia, Hungary, Romania and Moldova, countries that have welcomed more than 1 million people fleeing the war.

On the way, we found countless individual stories of horror, perseverance and kindness — and a group of unique countries giving back any way they can, while living with their own fears that they could be next.

Moldova in some ways felt the most like Ukraine. The only other non-NATO, non-EU country along the border, Moldova and Ukraine are also two of the poorest countries in Europe. Many families live across the border here, and both countries have lost territory to Russian aggression in the past.

There’s a kinship you can feel between the countries, with so many people we meet here calling Ukrainians “their neighbors, their brothers.”

Despite few resources and crushing numbers, Moldovans are doing whatever they can to help. Since the start of the war, more than 380,000 people have fled through the country, more than 15% of the country’s entire population and the most per capita of any other country.

We discovered an old movie theater in the country’s capital of Chisinau that had been left standing empty for four years, now converted into a shelter for up to 200 people. The walls were crumbling, but the place had brand new mattresses on the floor.

The makeshift home meant a place to stay for Irina and her four-year-old son, Arcadyi. Irina tells us she didn’t want to leave Odessa. Her other son turned 18 in October and since he is now old enough to fight, he isn’t allowed to leave Ukraine. But she says he told her she had to go, she had to save his little brother. She had to make sure at least one son survived this war.

She chose to come here to Moldova, because it was the closest that she could stay to her other son. It’s something we hear from many refugees — the desire to stay as close to home as they can. But Moldova is complicated. It’s close to Ukraine, but also to Russia. There are pro-Russian parties in the government and in some groups in town.

While we’re at the shelter, a tractor pulls up to drop off supplies. On it — a large Z, a symbol that’s now become synonymous with Putin’s forces in Russia and is often seen on the tanks there. A tractor with support for Russia, dropping off items that locals have donated to help Ukrainians feeling the Russian attack? Nothing about the scene makes sense, but it’s perhaps the best explanation of life in Moldova.

Close proximity to Russia means some people befriend the country, and many are worried that they could be invaded next.

We found a similar fear in Romania. On my way out of the region, we flew out of a small airport close to the border. A security guard there asked us what it was like in Ukraine. I asked if he had family there. He said, “No, I’m just worried that Putin will come after us next.”

Romania is also a NATO and European Union member. Attacking it would have worldwide implications. But even with these assurances, people here still live in fear.

Romania has the largest border with Ukraine of any EU country. Driving along the winding road as it hugs the dividing line between the two countries, we see mostly vast, empty miles. It makes sense that it’s a well-known route for illegal crossings. That could mean men trying to flee Ukraine. We see at least one man sitting with police on the side of the road. But at official crossings, it is almost exclusively women and children.

In Siret, Romania’s busiest border crossing, we meet Elenea and her young daughter Katya just moments after they cross. The mother tells us they’re from Kiev and lived right by the television tower that was bombed recently. They wanted to stay, but when one of Katya’s classmates died, Elenea knew she had to leave. We’re there as she FaceTimes her husband to let him know they made it across safely. He had to stay behind to fight.

Working in this job, you’re used to being with people during the worst and often hardest moments of their lives. But witnessing this intimate moment broke me. A simple check in between husband and wife, now torn apart by war. Their daughter now asking when she would be able to see her dad again. A heartbreak so big, you could see it.

Sadly, their story isn’t uncommon. We met so many families forced to separate, unsure when, or if, they will ever be together again.

And as war rages on, the numbers of those fleeing only keep increasing. We hear rumblings from NGOs and volunteers, even other refugees, about hundreds of thousands of internally displaced Ukrainians waiting just on the other side of the border. People want to stay in Ukraine, but may have to flee as the fighting moves west. We ask for numbers of those at the border, but no one is able to tell us for certain.

While everyone says they want to remain open to refugees, resources are already stretched thin. If one million people turns into 2 or 3 million, there are concerns about how these countries can keep up.

For now, people are stepping up however they can.

In Slovakia, we meet Father Pavel Novack who leads a congregation at a small church less than a mile from the border. He helped turn a school nearby into a shelter, one of 24 in this small region. Everything inside is donated from the community. He’s already helped more than 100 refugees, and on the day we visit there are 34 people living inside. Entire groups of families and friends share one room, but always with a roof, food and plenty of hope to go around.

Father Pavel says refugees of all faiths are welcome. He shows us his church and tells us that in Orthodox Christianity the sermons are always sung, and as the sun sets outside he begins to pray. After a day of running around chasing stories and driving hundreds of miles, his song stopped our whole crew and forced us to stand still. His voice filled the tiny house of worship with a calmness we hadn’t felt in days. In that brief moment, the war, the heartache, the violence all felt far away.

On our final day, we visited a small park in Moldova and stumbled into a group of older people dancing. As Moldovan music blasted on speakers and elderly couples held hands and shouted in delight, you could feel their joy from across the park. With war just a few dozen miles from where they stood, and with refugees fleeing unthinkable violence, this group remembered to dance.

We watched this moment of joy, of life lived well, and were reminded what’s worth fighting for.

Across the border from Uvalde, anger, sorrow, calls to action in Mexico after another US mass shooting