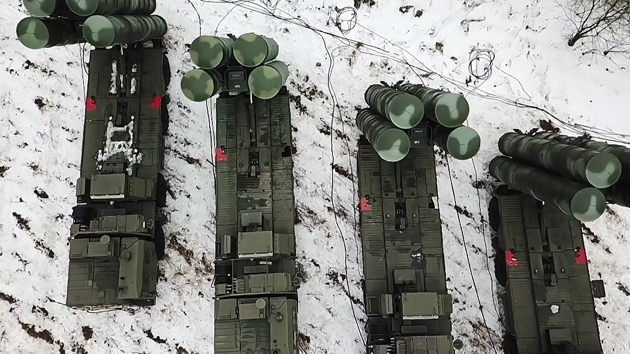 (KYIV, Ukraine) — Russia has officially kicked off the main phase of huge joint military exercises in Belarus, as Western countries continue to warn Russian forces massed near Ukraine could be used to launch a possible attack.

Russia has poured an unprecedented number of troops and equipment into Belarus over recent weeks ahead of the 10-day drills, moving units almost 6,000 miles from its far east and deploying tanks, long-range artillery and advanced fighter jets.

The United States and NATO countries have expressed worries that the exercises could be used as a cover for preparations for a possible on Ukraine, whose capital, Kyiv, is less than 200 miles south.

But Russia and Belarus have insisted the drills are just defensive war games. Russia’s defense ministry on Thursday said the exercises, called “Union Resolve 2022,” will “practice averting and repelling external aggression via a defensive operation, as well as combating terrorism and defending the interests” of Russia and Belarus.

The exercises are due to end on Feb. 20 and the Kremlin has said its troops will leave Belarus then.

Russia’s deployment of troops to Belarus is part of its broader military buildup massing over 100,000 troops along Ukraine’s eastern border and to the south in Crimea. Independent military analysts have sounded the alarm over the exercises, saying the scale of the Russian deployment is vastly larger than anything since the Cold War and includes units that would be used in a major invasion, such as advanced anti-air defences and Iskander-M long-range missile brigades. Satellite imagery has shown some of the Russian units are parked only a few dozen miles from Ukraine’s border, in areas not officially designated for the exercise.

The Belarus drills will coincide with what Western countries and some analysts have said is the window when Russia will reach the point of readiness to launch a major military operation against Ukraine.

NATO’s Secretary General Jens Stoltenberg on Thursday warned “the number of Russian forces is going up. The warning time for a possible attack is going down.”

“We must be prepared for the worst while remaining strongly committed to finding a political solution,” Stoltenberg added.

Ukrainian officials are much more skeptical and have denied the Russian forces in Belarus appear ready to launch an offensive. Defense Minister Oleksiy Reznikov this week said Ukraine did not see Russia forming any strike groups in Belarus and that it had insufficient forces, he estimated only several thousand.

Ukraine’s government has said it believes the Russian buildup right now is primarily aimed at putting psychological pressure on Ukraine with the threat of attack.

In the next 10 days Russia will make a vast display of military power to the north, east and south of Ukraine, holding exercises on an unprecedented scale also outside Belarus. The period seems likely to be a key moment in determining whether the crisis escalates or if the Russian buildup turns to a bluff.

The exercises in Belarus will also overlap with large-scale Russian naval drills in the Black Sea, that on Thursday prompted Ukraine to accuse Moscow of mounting an “unprecedented” naval blockade of Ukrainian ports. Six Russian warships, including amphibious landing ships, entered the Black Sea Wednesday night, to join a fleet already there. Ukraine said it “strongly protests” against the live-fire drills between Feb. 13 and Feb. 19 that are expected to close off access to much of its coast in the Black Sea and to the Sea of Azov.

If President Vladimir Putin is preparing to attack, the Russian build up appears to be approaching a point of maximum danger, according to some analysts, who say it has nearly completed its build up of heavy equipment and is now entering a phase where it will move up personnel to man it.

That does not mean that Russia will attack — U.S. officials say they believe Putin has not yet made a decision — just that it will have the forces in place to do so within the next two weeks.

“Once the second phase of the exercise begins on the 10th, I think they’re going to have everything they need in place and I think that week or the week after would make the most sense for an escalation if Russia is planning on doing an escalation,” Rob Lee, an analyst at Kings College London’s War Studies department, told ABC News.

An analysis by Janes, the defense think tank, estimated there are at least 14 Russian battalion tactical groups in Belarus with around 8,000 to 14,000 troops. The U.S. has said it assesses as many as 30,000 could take part.

“Best case scenario at the end of the exercise they start moving that equipment out,” Lee said. But as long as that equipment is still there then the risk is going to be very high of an escalation.”

Lee said he believed a military incursion was more likely than not.

The Kremlin has denied it has any invasion plans, dismissing it as Western “hysteria.” After meeting the U.K.’s foreign minister in Moscow on Thursday, Russia’s Foreign Minister Sergey Lavrov mocked Western allegations Russia was preparing to attack, including claims it might be waiting for the ground to freeze to allow tank movements.

“It’s like when they say that Russia is waiting for the ground to freeze so that tanks can easily enter Ukraine,” he added. “It seems that our British colleagues were on similar ground today, off of which bounced all the facts we presented them.”

Key talks are taking place in Berlin Thursday aimed at continuing diplomatic efforts to de-escalate the crisis. Ukraine and Russia will meet at the so-called “Normandy Format,” the long-running negotiations, mediated by France and Germany, aimed at resolving the conflict between Ukraine and Russian-backed separatists in its east.

No breakthrough is expected, but Western countries are hoping the talks can build on the small positive signs for diplomacy that emerged from French President Emmanuel Macron’s meeting with Putin in Moscow at the start of this week.