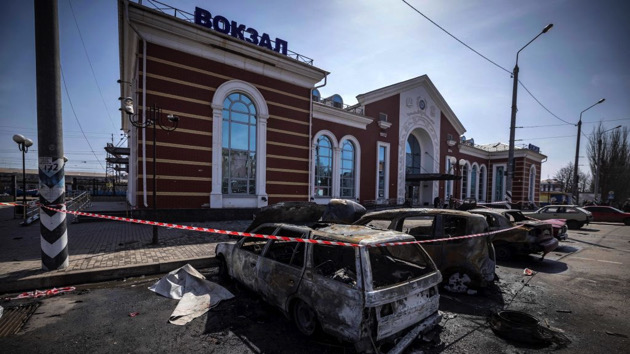 (NEW YORK) — Russian President Vladimir Putin’s “special military operation” into neighboring Ukraine began on Feb. 24, with Russian troops invading from Belarus, to the north, and Russia, to the east. Russian forces have since been met with “stiff resistance” from Ukrainians, according to U.S. officials.

In recent days, Russian forces have retreated from northern Ukraine, leaving behind a trail of death and destruction. After graphic images emerged of civilians lying dead in the streets of Bucha, a town northwest of Kyiv, the United States and European countries accused Russia of committing war crimes.

The European Union announced Friday a fifth set of sanctions against Russian individuals and businesses, including a prohibition to buy and import coal and solid fossil fuels, with the package expected to include sanctions on Russian President Vladimir Putin’s two adult daughters, Maria Vorontsova and Katerina Tikhonova, who were sanctioned by the United States earlier this week.

An E.U. spokesperson would not confirm to ABC News on Friday morning that Putin’s daughters were among the latest individuals targeted, but said more details would be announced later in the day.

The bloc’s top diplomat, Josep Borrell, said in a statement Friday that the “latest sanctions were adopted following the atrocities committed by Russian armed forces in Bucha and other places under Russian occupation.”

“The aim of our sanctions is to stop the reckless, inhuman and aggressive behaviour of the Russian troops and make clear to the decision makers in the Kremlin that their illegal aggression comes at a heavy cost,” Borrell added.

“Our unprecedented package of sanctions is hitting the elite and their families, while degrading the Russian economy on a scale Russia hasn’t seen since the fall of the Soviet Union,” U.K. Foreign Secretary Liz Truss said in a statement Friday. “But we need to do more. Through the G-7, we are ending the use of Russian energy and hitting Putin’s ability to fund his illegal and unjustified invasion of Ukraine.”

“Together, we are tightening the ratchet on Russia’s war machine, cutting off Putin’s sources of cash,” she added.

Russia denied its involvement in a rocket attack that killed dozens of people at a train station in eastern Ukraine on Friday.

Kremlin spokesman Dmitry Peskov alleged that the involvement of Russian forces in the attack on the railway station in the Ukrainian city of Kramatorsk was already ruled out by the Russian Ministry of Defense, based on the type of missile that was used — a Tochka-U short-range ballistic missile.

“Our Armed Forces do not use missiles of this type,” Peskov told reporters during a press briefing Friday. “No combat tasks were set or planned for today in Kramatorsk.”

Apr 08, 7:52 am
Death toll rises to 39 after attack on Ukrainian train station

At least 39 people were killed in a rocket attack on a railway station in eastern Ukraine on Friday, authorities said.

Two Russian rockets struck the train station in the city of Kramatorsk in Donetsk Oblast on Friday morning, according to Ukraine’s state-owned railway company, which in a statement via Facebook called the attack “a purposeful strike on the passenger infrastructure of the railway and the residents of the city of Kramatorsk.”

By Friday afternoon, Donetsk Oblast Gov. Pavlo Kyrylenko confirmed that the death toll had risen from 30 to 39. He said in a statement via Telegram that another 87 were wounded, many seriously. The number of injured was down from earlier estimates of more than 100.

The attack occurred as “thousands” of civilians fleeing the Russian invasion were at the train station waiting to be taken to “safer regions of Ukraine,” according to Kyrylenko, who accused Russian forces of “deliberately trying to disrupt the evacuation of civilians.”

“The evacuation will continue,” the governor added. “Anyone who wants to leave the region will be able to do so.”

Graphic images provided by Ukrainian officials showed the aftermath of the attack — bodies lying on the ground next to scattered luggage and debris, with charred vehicles parked nearby. The remains of a large rocket with the words “for our children” in Russian painted on the side was also seen on the ground next to the main building of the station.

Earlier this week, large crowds of people were seen waiting on the platform to board trains at the Kramatorsk railway station as they fled the city in Ukraine’s disputed Donbas region.

Since 2014, Russia-backed separatist forces have controlled two breakaway republics of the Donetsk and Luhansk oblasts in the Donbas. The separatists have been fighting alongside Russian troops to seize more territory there, after Russia launched its invasion of Ukraine on Feb. 24. Now, the Russian military is said to be refocusing its offensive in the Donbas as it withdraws its troops from northern Ukraine.

Apr 08, 6:19 am
EU president, top diplomat to meet with Zelenskyy in Kyiv

The head of the European Commission, Ursula von der Leyen, and the bloc’s top diplomat, Joseph Borrell, were due to arrive in Ukraine’s capital on Friday.

While in Kyiv, the pair will meet with Ukrainian President Volodymyr Zelenskyy. It will be their first visit to the Ukrainian capital since Russia launched its invasion on Feb. 24.

At least 30 people were killed and more than 100 others injured in a rocket attack on a railway station in eastern Ukraine on Friday morning, authorities said.

According to Ukraine’s state-owned railway company, two Russian rockets struck the train station in the city of Kramatorsk in Donetsk Oblast.

“This is a purposeful strike on the passenger infrastructure of the railway and the residents of the city of Kramatorsk,” Ukrainian Railways said in a post on Facebook.

Donetsk Oblast Gov. Pavlo Kyrylenko said the station was teeming with civilians fleeing the Russian invasion. Kyrylenko accused Russian forces of wanting “to take as many peaceful people as possible.”

“Thousands of people were at the station during the missile strike, as residents of Donetsk Oblast are being evacuated to safer regions of Ukraine,” Kyrylenko said in a post on Telegram.

Ukrainian President Volodymyr Zelenskyy confirmed that the rockets targeted an area at the station where “thousands of peaceful Ukrainians were waiting for evacuation.”

“Not having the strength and courage to confront us on the battlefield, they are cynically destroying the civilian population,” Zelenskyy said in a post on Facebook. “This is an evil that has no limits. And if it is not punished, it will never stop.”

Graphic images provided by Ukrainian officials showed the aftermath of the attack — bodies lying on the ground next to scattered luggage and debris, with charred vehicles parked nearby.

Apr 08, 4:33 am
Russian forces need ‘at least a week’ before redeploying, UK says

Russian forces in northern Ukraine have now fully withdrawn to neighboring Belarus and Russia, the U.K. Ministry of Defense said Friday in an intelligence update.

“At least some of these forces will be transferred to East Ukraine to fight in the Donbas,” the ministry added. “Many of these forces will require significant replenishment before being ready to deploy further east with any mass redeployment from the north likely to take at least a week minimum.”

Meanwhile, cities in eastern and southern Ukraine continue to be shelled by Russian forces as the troops advance “further south from the strategically important city of Izium which remains under their control,” according to the ministry.