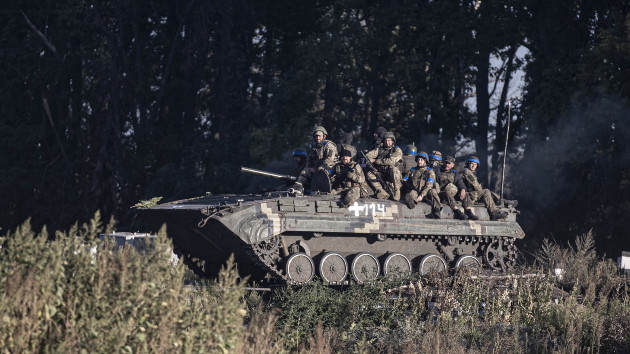 Russian troops have been surrendering en masse — even escaping the Luhansk region in stolen cars and bicycles, with some replacing their uniforms with stolen civilian clothes, according to a spokesperson for Ukrainian military intelligence.

“They understand the hopelessness of their situation,” the spokesperson said.

More than 20 towns and villages have been freed in 24 hours as the Russian military and its local collaborators flee, the spokesperson said.

Russian troops are allegedly making attempts to contact Ukrainian officers in an effort to independently negotiate the surrender of their units, as long as they get assurance of being treated according to the Geneva Conventions, according to the Ukrainian military spokesperson.

So many have surrendered that the country is running out of space to accommodate Russian prisoners of war, a Ukrainian presidential adviser said on Monday.

The International Atomic Energy Agency has established a presence at the site of the nuclear power plant in the southeastern Ukrainian city of Zaporizhzhia due to continued shelling in the region, IAEA Director General Rafael Mariano Grossi said in a statement Monday.

The mission, intended to ensure nuclear safety and security and to allow inspectors to take vital safeguard activities, has made clear of the “urgent and imperative goal” to halt the bombing and establish a protection zone surrounding the power plant, which is the largest in Europe.

In addition to the protection zone, the IAEA has established a second safety pillar that states all safety and security systems should be fully functioning and operating “normally and unhindered.” During observations, the safety team observed military equipment and vehicles getting in the way of systems functioning optimally, Grossi said.

The third pillar of the safety plan states that operating staff must be able to perform their duties without undue pressure or duress — an issue that has been raised many times since the Russian occupation of Zaporizhzhia began in March, according to the statement.

The IAEA is also mandating the maintenance of constant off-site power supply so that the power plant does not lose crucial functionalities, including the cooling of reactors and spent fuel, as well as uninterrupted supply chains and transportation to and from the site, which will be “especially crucial” should backup generators be needed again.

Effective radiation monitoring systems — both on and off site — and emergency preparedness, as well as continued reliable communication with the regulator and others, were also safety pillars outlined in the plan.

“Despite the ongoing challenges of the war, we have continued to implement safeguards in Ukraine,” Grossi said.