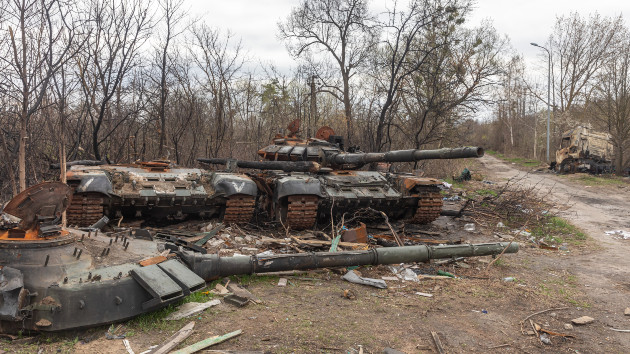 Apr 26, 7:07 am
US gathers NATO allies in Germany for Ukraine aid talks

The U.S. will “keep moving heaven and earth” to supply aid to Ukraine, Secretary of Defense Lloyd Austin said on Tuesday at a meeting of the Ukraine Security Consultive Group, which includes military representatives from about 40 countries.

“Ukraine clearly believes it can win. And so does everyone here,” Austin said in his opening remarks at Ramstein Air Base in Germany. “I know that we’re all determined to do everything we can to support Ukraine’s needs as the fight evolves.”

Austin said the group would seek to leave with a common understanding of “Ukraine’s near term security requirements, because we’re going to keep moving heaven and earth so that we can meet them.”

He called Russia’s war with Ukraine “indefensible,” adding that Putin didn’t “imagine the world [would] rally behind Ukraine’s so swiftly and so surely.”

Russian forces appeared to be moving to encircle “heavily fortified” Ukrainian positions in the east, the U.K. Ministry of Defense said on Tuesday.

“The city of Kreminna has reportedly fallen and heavy fighting is reported south of Izium, as Russian forces attempt to advance towards the cities of Sloviansk and Kramatorsk from the north and east,” the ministry said in its latest intelligence update.

Ukrainian forces in Zaporizhzhia were preparing for an attack from the south, the ministry said.

How China, Russia recently sought to spread political misinformation online, according to Meta