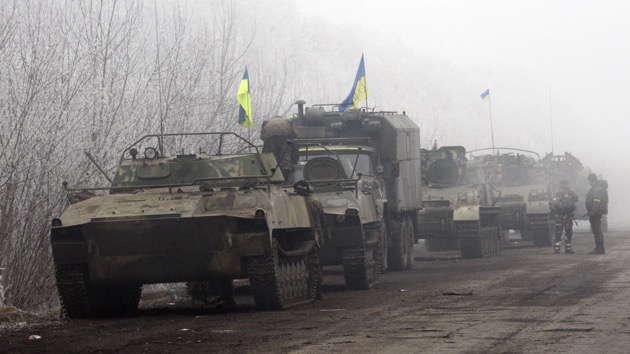 (NEW YORK) — Russian forces are continuing their attempted push through Ukraine from multiple directions, while Ukrainians, led by President Volodymr Zelenskyy, are putting up “stiff resistance,” according to U.S. officials.

Russian forces moving from neighboring Belarus toward Ukraine’s capital, Kyiv, don’t appear to have advanced closer to the city since coming within about 20 miles, although smaller advanced groups have been fighting gun battles with Ukrainian forces inside the capital since at least Friday.

Russian President Vladimir Putin on Friday addressed the sanctions imposed by the West, saying his country will “benefit” in the end.

“Of course it will cause damage to us as well,” Putin said during an appearance on a Russian news channel. “We will simply have to postpone some projects a little, acquire additional expertise, just as we did it in a whole range of other projects, including in aviation.”

“But in any case we will cope with these tasks before us and will even benefit from this situation in the end, because we will acquire additional expertise,” Putin said.

Putin also spoke about Ukraine: “We have absolutely no ill intentions with regard to our neighbors.”

He added, “I would advise them against escalating tensions and imposing any restrictions. We are honoring all our obligations, and we will continue to do so.”

More than 1.2 million people have been forced to flee Ukraine since Russian forces invaded on Feb. 24, according to the latest figures from the United Nations High Commissioner for Refugees (UNHCR).

Over 50% of the refugees from Ukraine are in neighboring Poland, UNHCR figures show.

UNHCR spokesperson Chris Melzer said the refugee flow from Ukraine into Poland appears to be slowing down, for now.

“The flow of people is lessening,” Melzer told ABC News on Friday. “The lines are much shorter.”

Melzer, who is currently at Budomierz on the Polish border, has been hearing reports of similar scenes at other crossings. But he cautioned that this doesn’t mean the situation is over.

“The process has been streamlined and less people seem to be coming,” he said. “Here, there are about two-hour waits for cars and pedestrians are passing through freely.”

Mar 04, 8:33 am
Zelenskyy alleges Russia is planning to stage ‘fake rally’ in Kherson

Ukrainian President Volodymyr Zelenskyy has accused Russian forces of planning to stage “a fake rally in support of Russia” in the strategic port city of Kherson.

In a televised address Friday morning, Zelenskyy claimed that Russian troops were busing in “outsiders” from Moscow-annexed Crimea and “trying to recruit traitors from among the locals” to demand that Kherson be a Russian city.

“I appeal to the residents of Kherson: You can stop that, show them that Kherson is your city,” Zelenskyy said. “We will not let go of what is ours.”

“Show them our flags, sing our anthem, show your spirit, let them know that they can only stay in Kherson temporarily and would never be able to claim ownership of Kherson or any other city of our country,” he added.

Russian forces took control of Kherson in southern Ukraine on Wednesday night. The Ukrainian government said earlier Friday that Russian troops have taken over Kherson’s television tower and are broadcasting Russian channels, suggesting that Moscow may be planning to permanently occupy the city.

More than 1.2 million people have been forced to flee Ukraine since Russian forces invaded on Feb. 24, according to the latest figures from the United Nations High Commissioner for Refugees (UNHCR).

Over 50% of the refugees from Ukraine are in neighboring Poland, UNHCR figures show.

Mar 04, 7:46 am
Russia has prepared puppet government for Kyiv: US official

Russia has selected and prepared a puppet government to install in Kyiv once its forces seize the Ukrainian capital, a senior U.S. administration official told ABC News.

U.S. intelligence believes Russian troops will ultimately crush Kyiv and decapitate its government, amid mounting evidence of indiscriminate shelling and a barrage against civilian targets across Ukraine, according to the official.

The official expressed concern that Ukraine lacks air power and what air force they had has been attacked, allowing Russia to mass its forces en route to Kyiv.

In a video message posted on social media, Mykolaiv Oblast Gov. Vitaliy Kim said Russian troops are moving on Mykolaiv city from two directions and that some have already entered the city limits but are not yet inside in significant numbers.

The city is preparing to defend itself, according to Kim.

“Don’t panic,” Kim said. “At the moment, the enemy is approaching from two directions but they’re not on our streets yet. We’re preparing the defenses, so women and children should get home now and the men join the defense lines.”

Kim said the Ukrainian military has a large amount of armour in Mykolaiv and urged residents “not to shoot at every vehicle,” since some could be Ukrainian.

“No need to shoot at everything that’s moving in the city. There’s a lot of our armor in the city,” he said. “{lease do not shoot inside the city, there’s no enemy here yet, but they are approaching.”

The U.S. Embassy in Kyiv took to Twitter on Friday to condemn Russia’s shelling of Ukraine’s Zaporizhzhia nuclear power plant, the largest in Europe.

“It is a war crime to attack a nuclear power plant,” the embassy tweeted. “Putin’s shelling of Europe’s largest nuclear plant takes his reign of terror one step further.”

NATO Secretary-General Jens Stoltenberg met with U.S. Secretary of State Antony Blinken and other NATO foreign ministers in Brussels on Friday morning to discuss the response to the ongoing Russian invasion of Ukraine.

During a press conference prior to the meeting at NATO headquarters, Blinken and Stoltenberg condemned Russia’s attacks on civilians in Ukraine and expressed concern over the reports of Russian shelling at Ukraine’s largest nuclear power plant.

“This just demonstrates the recklessness of this war and the importance of ending it, and the importance of Russia withdrawing all its troops and engage in good faith in diplomatic efforts,” Stoltenberg told reporters. “We provide support to Ukraine. At the same time, NATO is not part of the conflict. NATO is a defensive alliance, we don’t seek war conflict with Russia.”

Blinken emphasized that NATO and the United States “seek no conflict.”

“But if conflict comes to us, we’re ready for it,” he added. “And we will defend every inch of NATO territory.”

The head of the United Nations nuclear watchdog said Friday that no radioactive material was released at Ukraine’s largest nuclear power plant amid shelling from Russian forces overnight.

The shelling sparked a fire in a training building at the Zaporizhzhia nuclear power plant, the largest in Europe, in the eastern Ukrainian city of Enerhodar. The blaze has since been extinguished, according to Ukraine’s State Emergency Service.

Two security employees at the plant were injured during the incident, according to International Atomic Energy Agency (IAEA) Director-General Rafael Mariano Grossi.

“The safety systems at the six reactors were not effected,” Grossi said at a press conference in Vienna on Friday morning. “No radioactive material was released.”

“We are following the situation very, very closely,” he added.

A fire at the Zaporizhzhya nuclear power plant in the eastern Ukrainian city of Enerhodar was extinguished Friday, according to Ukraine’s State Emergency Service.

The fire occurred in a training building at the site after shelling from Russian forces. There were no victims, the emergency service said.

The Zaporizhzhia nuclear power plant is the largest in Europe.

Meanwhile, Energodar Mayor Dmytro Orlov told reporters Friday morning that the city is now under the control of Russian forces and fighting near the Zaporizhzhya nuclear power plant has stopped.

Ukraine’s national nuclear regulator has said that the plant’s employees are being permitted to work as normal, safety systems are currently functioning and there was no reported change in radiation levels at the site.

Mar 04, 2:12 am
UN nuclear watchdog warns of ‘severe danger if any reactors were hit’ at plant

The International Atomic Energy Agency (IAEA) has appealed for a halt of the use of force at Ukraine’s largest nuclear power plant and warned of “severe danger if any reactors were hit.”

The United Nations nuclear watchdog said in a statement early Friday that it was informed by Ukraine that the Zaporizhzhia nuclear power plant, the largest in Europe, had been shelled overnight in the eastern city of Enerhodar. IAEA Director-General Rafael Mariano Grossi “immediately” spoke with Ukrainian Prime Minister Denys Shmyhal as well as the country’s national nuclear regulator and operator about the “serious situation.” Grossi is expected to hold a press conference later Friday.

According to IAEA, the Ukrainian regulatory authority said a fire at the site had not affected “essential” equipment and plant personnel were taking mitigatory actions, and that there was no reported change in radiation levels at the plant.

Ukraine’s State Emergency Service said the blaze, which occurred in a training building after shelling from Russian forces, was extinguished Friday morning.

The IAEA said it is putting its Incident and Emergency Center (IEC) in “full response mode” due to the situation at the Zaporizhzhia nuclear power plant. The agency continues to closely monitor developments at the facility and remains in constant contact with Ukraine.

Why it may be hard to isolate Russia and has it become a pariah state?

Why it may be hard to isolate Russia, experts say