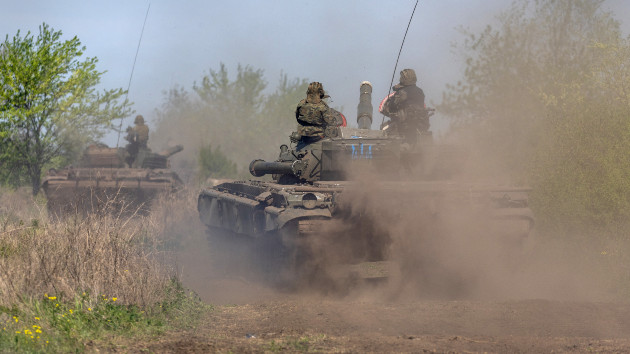 The Russian military last month launched a full-scale ground offensive in eastern Ukraine’s disputed Donbas region, attempting to capture the strategic port city of Mariupol and to secure a coastal corridor to the Moscow-annexed Crimean Peninsula.

The national police chief of Ukraine, Gen. Igor Klimenko, told ABC News on Tuesday that his officers are currently investigating 10,800 cases of suspected war crimes across the country, in areas that were previously occupied by Russian forces.

In the Kyiv region alone, police said they have so far recovered 1,262 bodies of slain civilians. The head of Kyiv police, Andriy Nebytov, told ABC News on Tuesday that his officers are currently working to identify 258 of those bodies.

Local police said five bodies were recovered on Monday, including three men who were lying in a mass grave. Police said the men had been shot in the head.

Local officers in the Kyiv region said they have found so many dead bodies of people killed when Russian forces occupied the area that they do not have the capacity to store them all in morgues. Instead, DNA samples will be taken before the bodies are buried while the process of identifying the victims is carried out.

Once the DNA process is complete, the graves of the deceased can be properly marked, according to local police.

French police officers are also in Ukraine to help with the identity process. According to Ukrainian police, technology available to their French counterparts can finish the DNA identification process within 24 hours — something which would normally take Ukrainian police three to four days.

May 10, 6:47 am
Russia paying the price for underestimating Ukrainian resistance, UK says

Russia is paying the price for underestimating Ukrainian resistance, the U.K. Ministry of Defense said Tuesday in an intelligence update.

“Russia’s invasion plan is highly likely to have been based on the mistaken assumption that it would encounter limited resistance and would be able to encircle and bypass population centres rapidly,” the ministry said Tuesday in an intelligence update. “This assumption led Russian forces to attempt to carry out the opening phase of the operation with a light, precise approach intended to achieve a rapid victory with minimal cost.”

“This miscalculation led to unsustainable losses and a subsequent reduction in Russia’s operational focus,” the ministry added.

Although he showed no signs of backing down, Putin did not make any declarations of war or victory in his annual speech for Victory Day, a national holiday in Russia commemorating the Soviet Union’s defeat of Nazi Germany in World War II. Instead, he drew parallels between Soviet soldiers battling Nazi troops and the Russian forces fighting now in Ukraine, as he has vowed to “de-Nazify” the former Soviet republic.

“You are fighting for the motherland, for its future, so that no one forgets the lessons of the Second World War,” Putin said Monday during a military parade in Moscow’s Red Square.

May 10, 6:30 am
US suspends tariffs on Ukrainian steel

The U.S. will temporarily suspend 232 tariffs on Ukrainian steel for one year, Secretary of Commerce Gina Raimondo announced Monday.

Ukraine’s steel industry is one of the foundations of the country’s economy, employing 1 in 13 Ukrainians, according to the U.S. Department of Commerce. Some of Ukraine’s largest steel communities have been among those “hardest hit by Putin’s barbarism,” the U.S. Department of Commerce said in a press release, and the steel mill in Mariupol has become a “lasting symbol of Ukraine’s determination to resist Russia’s aggression.”

“Steelworkers are among the world’s most resilient — whether they live in Youngstown or Mariupol,” Raimondo said.

The pledge to slash tariffs “is a signal to the Ukrainian people that we are committed to helping them thrive in the face of Putin’s aggression,” she said, “and that their work will create a stronger Ukraine, both today and in the future.”

Ukraine is currently losing about $170 million every day due to blocked ports and the country’s export potential has fallen by more than half, Ukrainian Prime Minister Denys Shmysal said on Monday.

Ukraine also submitted a several-thousand-page questionnaire, the second part of the answers, that must be completed by countries aspiring to join the European Union, Ukrainian President Volodymyr Zelenskyy said Monday during his nightly address.

“It usually takes months. But we did everything in a few weeks,” Zelenskyy said.

The Ukrainian president held talks with EU leaders on Monday and claimed Ukraine could be granted EU candidate status as early as June.

Russia running out of missiles

Russia has used up about half of its existing missiles during its invasion of Ukraine, Ukrainian Deputy Defense Minister Hanna Malyar said Monday. But the Russians still maintain the capacity and a certain supply of components to replenish some of their depleted arsenal, Malyar added.

The U.K. Ministry of Defense also stated in its Monday intelligence update that Russia’s stockpile of precision-guided munitions “has likely been heavily depleted.” Instead, the Russian military is now using “readily available but ageing munitions that are less reliable, less accurate and more easily intercepted.”

Russia will likely struggle to replace the precision weaponry it has already expended, the ministry said.

British Prime Minister Boris Johnson tweeted Monday that he has “never been more certain that Ukraine will win,” adding that Britain will stand “shoulder-to-shoulder with Ukraine for as long as it takes.”

Fighting continued on May 9 at the Azovstal steel plant while “some occupiers were walking along the streets” of the surrounding city of Mariupol parading with flags and Ribbons of Saint George, a traditional Russian military symbol, said Petro Andriushchenko, the Mariupol mayor’s advisor. Russian forces on Monday tried to blow up the bridge used to evacuate people from the steel plant, trying to “cut off our defenders from the possibility to exit,” Andriushchenko said.

There are still more than 100 civilians trapped in Azovstal, Pavlo Kyrylenko, who heads the Donetsk military administration, told local media.

Why it may be hard to isolate Russia and has it become a pariah state?

Why it may be hard to isolate Russia, experts say