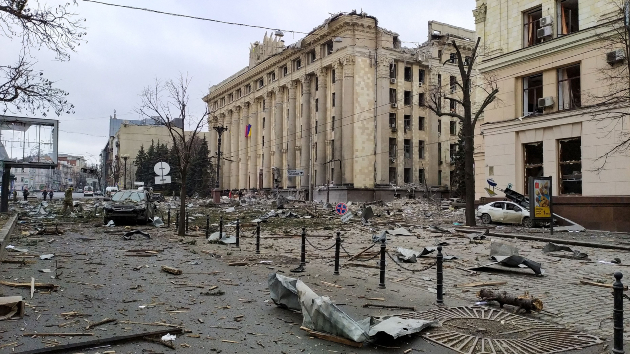 (NEW YORK) — Russian forces are continuing their attempted push through Ukraine from multiple directions, while Ukrainians, led by President Volodymr Zelenskyy, are putting up “stiff resistance,” according to U.S. officials.

Russians moving from Belarus towards Ukraine’s capital, Kyiv, don’t appear to have advanced closer towards the city since coming within about 20 miles, although smaller advanced groups have been fighting gun battles with Ukrainian forces inside the capital since at least Friday.

Russia has been met by sanctions from the U.S., Canada and countries throughout Europe, targeting Russia’s economy and Putin himself.

Here’s how the news is developing Tuesday. All times Eastern:

Google on Tuesday said it had blocked RT and Sputnik, Russian state-linked channels, from YouTube in Europe.

Due to the ongoing war in Ukraine, we’re blocking YouTube channels connected to RT and Sputnik across Europe, effective immediately. It’ll take time for our systems to fully ramp up. Our teams continue to monitor the situation around the clock to take swift action.

“Our teams continue to monitor the situation around the clock to take swift action,” the company said.

Ukrainian President Volodymyr Zelenskyy on Tuesday said the Russian attack on Kharkiv’s main square was an act of “undisguised terror.”

“After that, Russia is a terrorist state. No one will forgive. Nobody will forget,” he said on Facebook.

At least 660,000 people have fled Ukraine into neighboring countries in the six days since the Russian invasion began, the U.N. Refugees Agency said.

At the Polish border, UNHCR staff reported queues that were miles long.

“Those who crossed the border said that they had been waiting up to 60 hours,” the agency said on Tuesday. “Most arrivals are women and children from all parts of Ukraine. Temperatures are freezing and many have reported spending days on the road waiting to cross.”

Agency staff said people were waiting up to 20 hours to enter Romania. In Hungary, arrivals were “steady and waiting times vary.” The 37-mile trip between Odessa, Ukraine, and the border with Moldova was taking some refugees 24 hours, the agency said. And arrivals in Slovakia, where asylum laws were rapidly changed, were lower than elsewhere, agency staff said.

An unknown number of Ukrainian citizens have also been displaced within the country, Filippo Grandi, the agency’s commissioner, told the U.N. Security Council on Tuesday.

“The situation is moving so quickly, and the levels of risk are so high by now, that it is impossible for humanitarians to distribute systematically the aid, the help that Ukrainians desperately need,” he said.

The International Organisation for Migration said more than 470,000 people of various nationalities, “including a large number of overseas students and labour migrants,” are still in Ukraine.

Video from the scene shows a large projective hitting next to the regional state administration building on Kharkiv’s Freedom Square, causing a huge blast. Aftermath shot on phones from the scene and inside the building, show it shattered with debris strewn around.

Ukraine’s emergency services ministry said at least six people, including one child were injured. It was unclear if anyone was killed.

Monday’s shelling followed a sustained bombardment of civilian areas yesterday and overnight in Kharkiv by Russian heavy artillery, including multiple rocket launchers and an alleged use of cluster munitions.

“What is happening in Kharkiv is a war crime!” Sinegubov wrote on Facebook. “The Russian enemy is shelling whole residential neighborhoods of Kharkiv, where there is no critical infrastructure, no Ukrainian armed forces positions, which the Russians could be targeting.”

Sinegubov accused Russia of conducting the attacks during the day, when civilians were on the street. He said the city’s emergency services are unable to keep up with the number of attacks and injured.

So far at least 11 are dead, with dozens injured, he said.

Russian forces in Kharkiv appear to have shifted tactics to employing heavy artillery indiscriminately against the city, in an apparent effort to bombard and terrorize it into submission.

Sinegubov claimed the Russians were changing tactics because their offensive capabilities on the ground were running out and so they had nothing left but to launch aerial bombardments.

The Indian Embassy in Kyiv on Tuesday urged Indians still in the capital to “leave Kyiv urgently today.”

“All Indian nationals including students are advised to leave Kyiv urgently today,” the embassy said on Twitter. “Preferably by available trains or through any other means available.”

Mar 01, 2:48 am
’We will fight until the end,’ says Ukrainian parliament member

Solomiia Bobrovska, a member of Ukraine’s parliament, on Monday said Ukrainians would “fight to the end” as they defend Kyiv from a Russian invasion.

“That’s the mood of Ukrainians. We are staying behind altogether, and we do understand that with the total second line staying behind their shoulders. And I think we will fight until the end,” Bobrovska told ABC News’ Linsey Davis.

However, IAEA Director General Rafael Mariano Grossi said he “remained gravely concerned about maintaining their safety and security during the current conflict.”

Ukraine’s foreign ministry told the IAEA on Monday that Russian troops are “operational” near a functioning nuclear power plant at Zaporizhzhia, but the troops haven’t entered it so far. Any fighting near nuclear facilities causes alarm, and Ukraine has four sites in total with 15 reactors.

“It is extremely important that the nuclear power plants are not put at risk in any way,” Grossi said in a statement. “An accident involving the nuclear facilities in Ukraine could have severe consequences for public health and the environment.”

The IAEA Board of Governors will hold a meeting Wednesday to discuss the “safety, security and safeguards implications of the situation in Ukraine.”