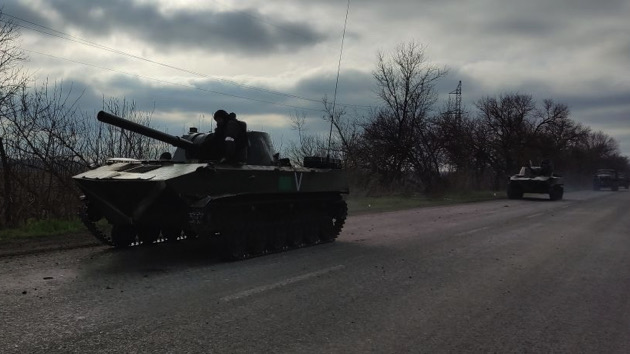 Russian forces attacked a steel plant in the shattered Ukrainian port city of Mariupol on Saturday, according to Oleksiy Arestovich, an adviser to the Ukrainian president’s office.

In a briefing, Arestovich said Russian forces had resumed airstrikes on the plant and were trying to storm it, a reversal of Russian President Vladimir Putin’s order two days earlier.

Ukrainian officials estimate that about 1,000 civilians are sheltered in the plant along with the remaining Ukrainian fighters.

Busses promised by Russia to evacuate people from Mariupol did not arrive on Saturday.

At least 200 Mariupol residents had gathered near the Port City shopping center to be evacuated to Zaporizhia, adviser to the mayor of Mariupol Petro Andryushchenko said on Facebook.

“Instead of the buses promised by the Russian side, the Russian military approached Mariupol residents and ordered them to go away because “there will be shelling now.” In fact, with rough coercion, they dispersed people. The buses were not submitted for loading,” he wrote.

Five citizens were killed, including one 3-month-old baby and 18 people were injured, said Andriy Yermak, the head of the president’s office.

“These are only those who were found. And most likely, there will be more,” he wrote.

Ukrainian forces were able to shoot down several missiles, but at least one landed and exploded, Gerashchenko said.

“Residents of the city heard explosions in different areas,” Gerashchenko said in a post on Facebook. “Residential buildings were hit.”

“The only aim of Russian missile strikes on Odesa is terror. Russia must be designated a state sponsor of terrorism and treated accordingly. No business, no contacts, no cultural projects. We need a wall between civilization and barbarians striking peaceful cities with missiles,” Ukrainian Foreign Minister Dmytro Kuleba said in a tweet.

Despite the increased activity, Russian forces have made no major gains in the last 24 hours as Ukrainian counterattacks continue to hinder their efforts, according to the UK Ministry of Defense.

Russian air and maritime forces have not established control in either domain, owing to the effectiveness of Ukraine’s air and sea defense.

Despite their stated conquest of Mariupol, heavy fighting continues to take place frustrating Russian attempts to capture the city, further slowing their desired progress in the Donbas.

UN Secretary-General to meet with Zelenskyy

Guterres will also meet with staff of U.N. agencies to discuss scaling up humanitarian assistance to the people of Ukraine.

“The remaining 396 crew members were evacuated from the cruiser to the ships of the Black Sea Fleet,” the defense ministry said Friday.

The warship sank on April 14 following what the Ukrainians claimed was a missile attack. Russia did not acknowledge an attack on the ship and continued to say a fire broke out after ammunition detonated.

The defense ministry’s latest announcement contradicts its earlier statement that all Moskva crew members had been rescued.

More than 20 countries to attend defense talks hosted by US

More than 20 countries have accepted an invitation to attend a Ukraine-focused defense talk on Tuesday hosted by the U.S., Pentagon press secretary John Kirby said Friday.

More than 40 NATO and non-NATO countries have been invited to the talks, which will be hosted by U.S. Defense Secretary Lloyd Austin at Ramstein Air Base in Germany, Kirby said.

“The goal is to bring together stakeholders from all around the world for a series of meetings on the latest [Ukrainian] defense needs and … ensuring that Ukraine’s enduring security and sovereignty over the long-term is respected and developed,” Kirby said.

Guterres wrote separate letters to Putin and Ukrainian President Volodymyr Zelenskyy on Tuesday asking to meet “to discuss urgent steps to bring about peace in Ukraine,” a U.N. spokesperson said earlier this week.

FINA also said Russian and Belarusian athletes and officials won’t be invited to any FINA events through the end of 2022.

European Council President Charles Michel and Russian President Vladimir Putin had a call Friday. Michel said afterwards on Twitter that he “strongly urged for immediate humanitarian access and safe passage from Mariupol and other besieged cities all the more on the occasion of Orthodox Easter.”

Michel also said he “firmly reiterated” the EU’s support for Ukraine and “condemnation and sanctions for Russia’s aggression.”

According to the Kremlin’s readout of the call, Michel asked Putin to have direct contact with Ukraine President Volodymyr Zelenskyy. The Kremlin said Putin “reaffirmed the well-known position on this matter, noting that such a possibility depends, in particular, on concrete results in the ongoing negotiations between Russian and Ukrainian representatives, during which the Ukrainian side is showing inconsistency and is not ready to seek mutually acceptable solutions.”

The United Kingdom announced Friday that it will soon reopen its embassy in Ukraine’s capital, Kyiv.

The U.K. Embassy in Kyiv, in northern Ukraine, was forced to temporarily close in late February due to Russia’s invasion. A contingent of British staff remained in western Ukraine to provide humanitarian and other support. U.K. Prime Minister Boris Johnson confirmed Friday that the embassy will reopen next week, “dependent on the security situation,” according to a press release from the U.K. Foreign, Commonwealth and Development Office (FCDO).

“The extraordinary fortitude and success of President Zelenskyy and the Ukrainian people in resisting Russian forces, means we will shortly be re-opening our British Embassy in Kyiv,” U.K. Foreign Secretary Liz Truss said in a statement. “I want to pay tribute to the bravery and resilience of the Embassy team and their work throughout this period.”

The embassy premises in Kyiv are currently being made secure before staff return, starting with U.K. ambassador to Ukraine Melinda Simmons. The U.K. continues to advise its citizens against all travel to Ukraine, according to the FCDO.

Russia’s decision to blockade a steel plant in Mariupol “likely indicates a desire to contain Ukrainian resistance” in the strategic port city “and free up Russian forces to be deployed elsewhere in eastern Ukraine,” the U.K. Ministry of Defense said Friday in an intelligence update.

The Azovstal Iron and Steel Works plant is the last holdout for Ukrainian fighters in besieged Mariupol.

Meanwhile, heavy shelling and fighting continues across eastern Ukraine’s Donbas region as Russian forces seek to advance further toward settlements including Krasnyy Lyman, Buhayikva, Barvinkove, Lyman and Popasna, “as part of their plans for the region,” according to the ministry.

“Despite Russia’s renewed focus they are still suffering from losses sustained earlier in the conflict,” the ministry added. “In order to try and reconstitute their depleted forces, they have resorted to transiting inoperable equipment back to Russia for repair.”

Apr 22, 6:34 am
Putin to speak with European Council president

Russian President Vladimir Putin will have a telephone conversation with European Council President Charles Michel on Friday before meeting with permanent members of the Russian Security Council, according to Kremlin spokesman Dmitry Peskov.

“Putin will now have an international conversation,” Peskov told reporters Friday. “It will be the President of the European Council, Michel. And then during the day, Putin is scheduled to have an operational meeting with the permanent members of the Security Council.”

The U.S. has assessed that the Ukrainian port city of Mariupol remains contested, and that Russian airstrike activity remains focused there and on the Donbas region, a senior U.S. defense official said Thursday.