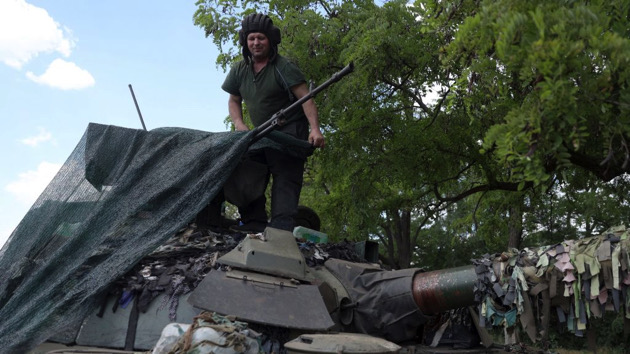 About 250 Ukrainian civilians have been evacuated from a chemical plant where they sought shelter in the besieged city of Severodonetsk in Eastern Ukraine, an official said.

Rodion Miroshnik, the Luhansk People’s Republic ambassador to Russia, said the civilians were evacuated safely from the Azot chemical plant in Severodonetsk.

“Servicemen of the LPR People’s Militia evacuated another about 250 people, including little children, from the premises of the Severodonetsk Azot plant,” Miroshnik said on social media Sunday.

He added that the evacuation came a day after about 200 civilians were evacuated from the chemical plant.

Following months of heavy fighting, Russian troops took complete control of the Severodonetski over the weekend, according to Oleksandr Striuk, chief of the city’s military administration.

One person was killed and six were injured, including a child, following a Russian missile strike Sunday in Ukraine’s capital city, officials said.

The Russian shelling of Kyiv struck a residential building in the city, according to Kyiv Mayor Vitali Klitschko.

Klitschko said at least six people were injured in the attack, including a 7-year-old girl. He said the girl was undergoing surgery Sunday for non-life-threatening injuries.

Klitschko said the girl’s mother was also injured in the attack.

A missile strike occurred in the Shevchenkivskyi neighborhood, near central Kyiv, officials said.

As Biden stood alongside German Chancellor Olaf Scholz at the official G7 welcome ceremony, ABC News’ Karen Travers asked if he had any reaction to the strikes on a residential neighborhood.

A missile struck an apartment block in Shevchenkivskyi, near central Kyiv, on Sunday morning, killing at least one and trapping others in the rubble, local officials said.

The Biden administration and other G7 leaders will announce on Sunday an import ban on Russian gold.

“This is a key export, a key source of revenue alternative for Russia, in terms of their ability to transact in the global financial system,” a senior administration official told reporters on a briefing call about the G7 summit in Germany. “Taking this step cuts off that capacity and again, is an ongoing illustration of the types of steps that the G7 can take collectively to continue to isolate Russia and cut it off from the global economy.”

The Treasury Department is expected to issue an official notice on Tuesday.

Gold is Russia’s second largest export after oil and a source of significant revenue, but much of Russia’s gold exportation has already been cut off in practice by banks, refiners and shippers. The move on Sunday marks an official severance of Russia from the world’s gold market.

The U.S. and U.K. are participating in Sunday’s announcement, but it is unclear whether all G7 countries will participate in the initiative. A Biden administration official tried to downplay concerns about potential disunity among G7 member states, pivoting instead to a talking point about efforts to cut off all financial pathways for Russia.

Pressed on whether Russia could continue to export gold by going through a country that does not participate in the ban, officials insisted the ban will be effective.

“We will continue to identify places where evasion as a risk continue to take steps to block off those pads,” an official said. “And the measuring gold in some ways is in fact, another step forward to block off ways that that Russia might seek to engage with the financial system, by virtue of all the other ways that have now been cut off to them.”

Emergency responders in Kyiv are working to free a woman from the top floor of a residential building that was hit by a Russian strike on Sunday morning.

An advisor to the minister of the interior told ABC News that the woman, who is in her 30s, is alive and trapped in the rubble.

At least one civilian was killed in Sunday’s strike, local officials said. At least one other, a young girl, was rescued from the building in Shevchenkivskyi, a central district a few moments from the historic center of the city.

“Friends! Search and rescue operations are underway in a residential building in the Shevchenkivskyi district where a missile hit,” Mayo Vitaliy Klychko said on Telegram. “There are people under the rubble. Some residents were evacuated, two victims were hospitalized. Rescuers continue to work, medics are on site.”

At least one residential building appeared to have had sections of its facade sheared off, photos from the scene showed. Emergency responders could be seen working on the upper floors of the building as smoke rose into the morning sky.

“Several explosions in the Shevchenkivskyi district,” Klychko said. “Ambulance crews and rescuers on the spot. Residents are being rescued and evacuated in two houses.”

At least one missile was shot down by Ukrainian air defenses, Oleksiy Kuleba, head of the Kyiv regional administration, said on Telegram.

“The remains of the missile fell on the outskirts of one of the villages in the area,” Kuleba said.

Jun 24, 9:01 am
Ukrainian forces to retreat from Severodonetsk

Ukrainian forces plan to retreat from the city of Severodonetsk, following weeks of fighting.

The local governor said Friday morning “it doesn’t make sense” to hold onto the city and “the number of people killed will increase every day,” in a statement on Telegram.

The city has faced a heavy bombardment of rockets and street-to-street fighting between Ukrainian and Russia troops for weeks.

Ukrainian officials said nearly 90% of buildings in Severodonetsk have been destroyed.

It’s believed 8,000 civilians remain. At one point, hundreds of civilians sheltered in a chemical plant.

Ukrainian President Volodymyr Zelenskyy praised the announcement on Twitter, calling it a “unique and historical moment,” adding, “Ukraine’s future is within the EU.”

It could take years for Ukraine to become an EU member. Five other countries that have been granted candidate status are currently negotiating their EU membership: Albania, North Macedonia, Montenegro, Serbia and Turkey.

Drone strike on al-Qaeda leader renews hostility between US, Taliban