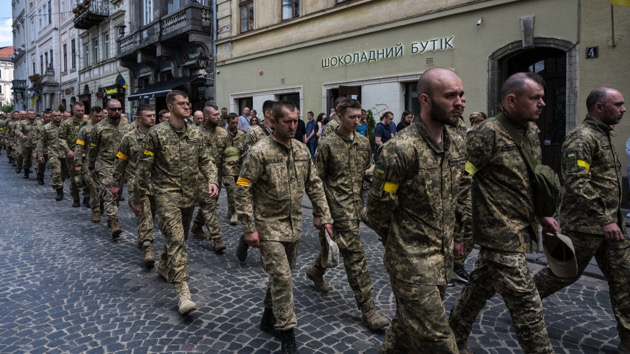 Ukrainian President Volodymyr Zelenskyy praised the announcement on Twitter, calling it a “unique and historical moment,” adding, “Ukraine’s future is within the EU.”

It could take years for Ukraine to become an EU member. Five other countries that have been granted candidate status are currently negotiating their EU membership: Albania, North Macedonia, Montenegro, Serbia and Turkey.

Russian forces are advancing toward the city of Lysychansk in eastern Ukraine’s Luhansk region, putting the Lysychansk-Severodonetsk pocket “under increasing pressure,” the British Defense Ministry said. Some Ukrainian forces have withdrawn from Lysychansk, “probably to avoid being encircled,” the officials said.

The Ukrainian army claims Ukrainian soldiers stopped the Russian offensive in the southern outskirts of Lysychansk on Thursday, inflicting losses and forcing them to retreat, and that to resume the offensive, Russian forces put forward reserves.

The U.S. is expected Thursday to announce a new $450 million military aid package that will include more High Mobility Artillery Rocket Systems, known as HIMARS.

Ukrainian Minister of Defence Oleksii Reznikov tweeted Thursday that the initial HIMARS package from the U.S. has arrived in Ukraine, and he thanked Secretary of Defense Lloyd Austin for the “powerful tools.”

The U.S. has committed over $6 billion to Ukraine since Russia’s invasion began, according to the Pentagon.

More than 8 million people have fled Ukraine since the start of the Russian invasion on Feb. 24, according to an update by the United Nations.

More than 4 million Ukrainians fled through Poland — by far the preferred route for the displaced, the U.N. report said. Hungary, the second most used route, reported just over 800,000 crossings.

Jun 23, 6:08 am
Belarusian military flexes its muscle near Ukrainian border

The military drills, scheduled to last until 1 July, will include special operations forces as well as freshly called up conscripts, Belarusian officials said on Telegram.

The Belarusian army has already been placing wooden dummies of tanks on the Ukrainian border to demonstrate their presence, Ukrainian Ministry of Defense spokesperson Alexander Motuzyanyk said on Wednesday.

Real weapons are arriving near the Ukrainian border, too, with a new batch of Russian missiles for the S-300 anti-aircraft missile system being brought to Belarus on Tuesday night, local monitoring groups reported. The delivery included at least 16 missiles, with the likely addition of one Pantsir missile defense system, the report said.

Still, Ukrainian officials maintain that “at this stage of the war,” there is no imminent threat “of the Belarusian army invading” Ukraine, Kyrylo Budanov, head of the Main Intelligence Directorate, said on Wednesday as cited by local media.

The European Union will temporarily shift back to coal to cope with slowing Russian gas flows, an EU official said on Wednesday, as a tight gas market and rocketing prices set off a race for alternative fuels.

“Europe should be ready in case Russian gas is completely cut off,” IEA chief Fatih Birol told The Financial Times on Wednesday.

While Russia denies premeditated supply cuts, several European countries, including Germany and Italy, reported a dip in gas flow via pipelines from Russia over the past week.

A four-way summit discussing ways to export grain blocked in Ukraine will be held in Istanbul in less than 10 days, Turkish presidential sources told local media on Tuesday.

According to Turkish officials, a military delegation will head to Russia this week to discuss details. On top of Russian and Ukrainian delegations, Turkish President Recep Tayyip Erdoğan and the UN Secretary General António Guterres are likely to attend the Istanbul summit, local sources said.

The lives of about 400 million people in different countries depend on Ukrainian food exports, Ukrainian President Volodymyr Zelenskyy said on Monday.