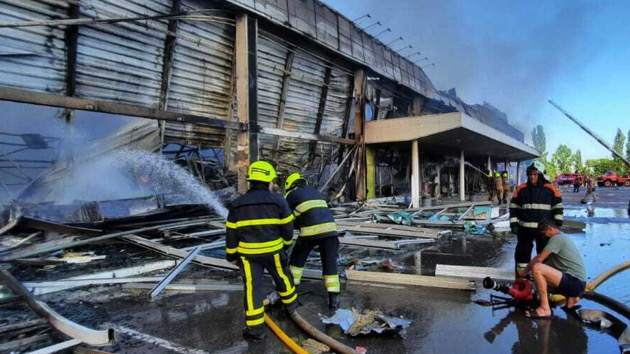 Jun 28, 8:17 am
Russian forces in Ukraine ‘are increasingly hollowed out,’ UK says

Ukrainian forces are still consolidating their positions on higher ground in the eastern city of Lyschansak after falling back from nearby Sieverodonetsk, the U.K. Ministry of Defense said Tuesday in an intelligence update.

According to the ministry, Russian forces over the weekend “launched unusually intense waves of strikes across Ukraine using long-range missiles.”

“These weapons highly likely included the Soviet-era AS-4 KITCHEN and more modern AS-23a KODIAK missiles, fired from both Belarusian and Russian airspace,” the ministry said. “These weapons were designed to take on targets of strategic importance, but Russia continues to expend them in large numbers for tactical advantage. Similarly, it fielded the core elements of six different armies yet achieved only tactical success at Sieverodonetsk.”

“The Russian armed forces are increasingly hollowed out,” the ministry added. “They currently accept a level of degraded combat effectiveness, which is probably unsustainable in the long term.

The death toll from a Russian missile strike on a Ukrainian shopping mall continued to rise Tuesday as rescuers sifted through the charred rubble.

Monday’s attack in the central Ukrainian city of Kremenchuk killed at least 18 people and wounded 59 others, including 25 who remain hospitalized Tuesday, according to the State Emergency Service of Ukraine. A day of mourning for the victims was declared Tuesday in the wider Poltava Oblast.

Ukrainian President Volodymyr Zelenskyy said Monday in his nightly address that more than 1,000 shoppers and workers were inside the mall during the afternoon attack and that it will take time to “establish the number of victims.” He condemned the incident as “one of the most daring terrorist attacks in European history.”

Russia warned Tuesday that Ukraine joining NATO could lead to World War III should Kyiv then attempt to encroach on the Moscow-annexed Crimean Peninsula.

“Crimea is a part of Russia for us. And that means forever,” Russian Security Council Deputy Chairman Dmitry Medvedev said in an interview Tuesday with Russian newspaper Argumenty i Fakty. “Any attempt to encroach on Crimea is a declaration of war against our country. If a NATO member country does so, this would mean a conflict with the North Atlantic Alliance. The World War III. A complete catastrophe.”

“Ukraine within NATO is far more dangerous for our country [than Sweden and Finland],” he added. “And this is linked to what [Russian] President Vladimir Putin has repeatedly spoken about: the presence of unresolved territorial disputes, as well as the difference in understanding of the regions’ status.”

Although Moscow is not opposed to Sweden and Finland joining the military alliance, Russia will still have to reinforce its borders in this case, according to Medvedev.

“Accession of Sweden and Finland to NATO will not pose any new threats to us,” he told Argumenty i Fakty. “If they feel better and calmer by joining the alliance, then so be it. Even without them, without Sweden and Finland, NATO is close to our country.”

“Should this enlargement of NATO happen, the length of its land borders with Russia will more than double. And we will have to strengthen these borders,” he added. “The Baltic region’s non-nuclear status will become a thing of the past, the group of land and naval forces in the northern sector will be seriously increased. No one is happy with it. Nor are the citizens of these two NATO candidate countries.”

Jun 27, 6:42 pm
Zelenskyy calls mall attack one of ‘the most defiant terrorist attack in European history’

Ukrainian President Volodymyr Zelenskyy lashed out against Russian forces in a recorded speech Monday hours after a missile struck a shopping mall in Kremenchuk, calling the attack “one of the most defiant terrorist attacks in European history.”

“Only totally insane terrorists, who should have no place on earth, can strike missiles at such an object. And this is not an off-target missile strike, this is a calculated Russian strike — exactly at this shopping mall,” Zelenskyy said.

The Ukrainian president said the rescue and salvage efforts were still ongoing.

Ukraine’s Emergency Service reported that 15 people were killed and 59 were injured in the attack as of Monday evening.

“We must be aware that the losses may be significant,” Zelenskyy said.

G-7 leaders released a statement condemning Russia’s missile strike on a shopping mall in Kremenchuk, Ukraine, saying it constitutes a war crime and that President Vladimir Putin “and those responsible will be held to account.”

“We stand united with Ukraine in mourning the innocent victims of this brutal attack,” they said.

The summit began in Germany on Sunday with a heavy focus on the invasion of Ukraine, and the group announced more steps to try and stop Putin from funding his war.

“Today, we underlined our unwavering support for Ukraine in the face of the Russian aggression, an unjustified war of choice that has been raging for 124 days. We will continue to provide financial, humanitarian as well as military support for Ukraine, for as long as it takes. We will not rest until Russia ends its cruel and senseless war on Ukraine,” G-7 leaders said.

Texas man detained in Russia for months due to ‘political purposes’: Congressman