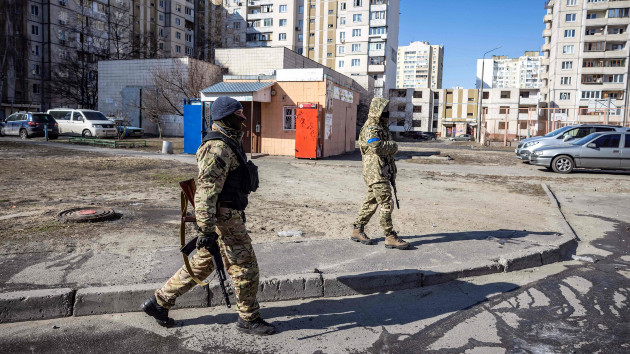 Russian forces moving from neighboring Belarus toward Ukraine’s capital, Kyiv, have advanced closer to the city center in recent days despite the resistance. Heavy shelling and missile attacks, many on civilian buildings, continue in Kyiv, as well as major cities like Kharkiv and Mariupol. Russia also bombed western cities for the first time this week, targeting Lviv and a military base near the Poland border.

Twenty-three people were killed and 26 others were wounded from shelling on a school and community center in Merefa, which is near Kharkiv in eastern Ukraine, the Kharkiv Region Prosecutor’s Office said.

A U.S. citizen was killed Thursday in Chernihiv in northern Ukraine, a State Department official confirmed to ABC News, after Chernihiv regional police reported an American was killed by Russian shelling.

The State Department official did not provide more details.

About 400 bulletproof vests that were set to be sent to aid Ukraine were stolen from the Ukrainian Congress Committee of America’s headquarters in Manhattan’s East Village, according to the New York City Police Department.

No arrests have been made in the burglary, which took place early Wednesday, police said.

During a virtual bilat with Irish Taoiseach Micheál Martin on Thursday, President Joe Biden said the world is “united” as Russia’s invasion in Ukraine continues.

“We have to be united and we certainly are,” Biden said. “But Putin’s brutality and what he’s doing, and his troops are doing in Ukraine, is just inhumane.”

The Taoiseach told Biden, “I share with you our horror at the barbaric attack on the civilians,” and said Biden’s leadership through this has been “firm,” “determined” and “strong.”

Biden commended Ireland for taking in Ukrainian refugees, saying it “speaks so loudly about your principles.”

Mar 17, 8:49 am
Biden to speak with Chinese President Xi on Friday

President Joe Biden will speak to Chinese President Xi Jinping on Friday about “Russia’s war against Ukraine,” among other topics, White House press secretary Jen Psaki said in a statement.

It’s the first time the two will speak since Russia’s invasion began and it follows National Security Advisor Jake Sullivan’s seven-hour face-to-face meeting in Rome with his Chinese counterpart earlier this week.

The U.S. has been ramping up its warnings to China over concerns that it could assist Moscow with military equipment and other aid.

Russia’s invasion of Ukraine has “largely stalled on all fronts,” the UK Ministry of Defence said on Thursday.

“Russian forces have made minimal progress on land, sea or are in recent days and they continue to suffer heavy losses,” the Ministry said in an update posted to Twitter.

The Ukrainian resistance “remains staunch and well-coordinated,” the update said.

“The vast majority of Ukrainian territory, including all major cities, remain in Ukrainian hands,” the Ministry said.

Find out more about the UK government’s response: https://t.co/OdjSV0U43C

A Ukrainian official claimed Wednesday that Russian airstrikes destroyed a theater in the besieged city of Mariupol where civilians were taking shelter.

Ukrainian President Volodymyr Zelenskyy said during an address tonight that hundreds of people were hiding in the theater and that the death toll is still unknown.

“Russia is killing civilians!” Kyrylenko said, adding that it is also “impossible to determine” the number of victims in Mariupol since the start of the invasion.

The city has been burying its dead in a mass grave on the outskirts of Mariupol as it endures heavy shelling.