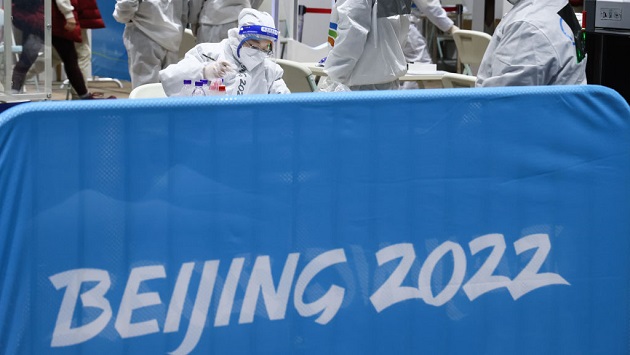 (BEIJING) — With the Beijing Olympics set to begin, a group of international scientists is once more calling for a “comprehensive international investigation” into the origins of COVID-19.

It’s the latest in a series of strongly worded letters demanding more transparency from the Chinese government, once again stoking a contentious debate that’s been ongoing throughout the pandemic’s many months.

The letter — signed by 20 scientists from the U.S., U.K., Germany, New Zealand, France, Australia, India and Japan — echoes what have become broad international calls for a more thorough examination, unfettered by geopolitics, into where COVID-19 came from. It also underscores continued criticism from both the U.S. and international bodies over the Chinese government’s lack of cooperation.

“The Olympic Charter states that ‘The goal of Olympism is to place sport at the service of the harmonious development of humankind, with a view to promoting a peaceful society concerned with the preservation of human dignity,"” wrote the scientist group, co-organized by Jamie Metzl, a former WHO adviser and senior fellow at the Atlantic Council. “Unfortunately, as athletes from across the globe gather together today for the start of the 2022 Beijing Olympic Winter Games, this noble aspiration is being undermined through the ongoing efforts of the host government to prevent a comprehensive international investigation into the origins of the COVID-19 pandemic.”

Increased and united scrutiny into COVID-19’s origins is “a true representation of the ideals underlying the Olympic movement,” the letter said, and would “promote openness and mutual trust,” especially at a time when the world’s athletes convene upon Beijing.

Failing to understand how the virus — which is now responsible for claiming the lives of more than 5.7 million people worldwide — leaves “everyone on earth and future generations … at heightened and unnecessary risk of future pandemics,” the letter said.

No firm conclusion has yet been made as to where COVID-19 came from, with international health and U.S. intelligence bodies stalled between two theories: whether the virus emerged from natural animal spillover, or whether it came from an accidental lab experiment leak in Wuhan, China.

Following President Joe Biden’s 90-day push this summer for his intel agencies to “redouble their efforts” in uncovering a more definitive conclusion on COVID-19’s origins, the intelligence community has remained “divided” on its most likely origins. The Office of the Director of National Intelligence, in its report, underscored the barriers to finding any concrete answers — namely, unhelpful noncooperation from the Chinese government, which is “likely to impede investigation.”

A World Health Organization-led team also emphasized that there must be more sharing of records, samples and raw data for any real progress to take place.

The WHO’s first phase study into COVID-19’s origins, which deemed a lab leak “extremely unlikely,” faced a barrage of questions on issues of access and transparency. WHO Director-General Tedros Adhanom Ghebreyesus said there was more work to be done and the assessment had not been “extensive enough.”

The UN health agency has formed a new team of scientists for a new phase of investigation that included lab audits — which the Chinese government rejected, saying they could not accept needless “repetitive research” when “clear conclusions” had already been reached.

Without a fresh flow of that robust information, the debate over COVID-19’s origins has remained shrouded in a haze of circumstantial evidence.

“The fact is that they’re just not, they’re just not being transparent,” Biden said of China at his news conference earlier this month, adding that he “made it clear” to President Xi Jinping during their November summit that “China had an obligation to be more forthcoming on exactly what the source of the virus was.”

Meanwhile, Beijing has vehemently denied the virus could have come from one of its labs, pressing for the investigation to look outside China. Chinese authorities have suggested, without evidence, that the virus was already spreading in the United States prior to late 2019 — attempting to move the sharp focus on Wuhan’s early viral clusters to a conspiracy theory that COVID-19 came from a U.S. Army lab.

Foreign Ministry spokesperson Zhao Lijian tweeted in March 2020 that “it might be US army who brought the epidemic to Wuhan,” claiming that American military athletes who attended the World Military Games in Wuhan in October 2019 could have been responsible for bringing COVID-19 into China.

U.S. Department of Defense officials pushed firmly back on the accusation, calling it “misinformation and disinformation,” and Chad Sbragia, the then-Deputy Assistant Secretary of Defense for China, called claims that the virus began with a U.S. Army service member “patently false and, frankly, unhelpful.”

Experts say it could take years to find COVID-19’s origins, even with full international cooperation and an intact trail of scientific evidence. It took scientists more than a decade to identify the bat population that was the home of a 2002 SARS epidemic.

Even so, they also underscore that understanding where and how this pandemic started may be crucial to preventing the next one.

“Understanding how this terrible crisis began is essential to preventing future pandemics,” the letter said, “and building a safer future for all.”

Madagascar faces millions of years of extinctions due to human activity, scientists say