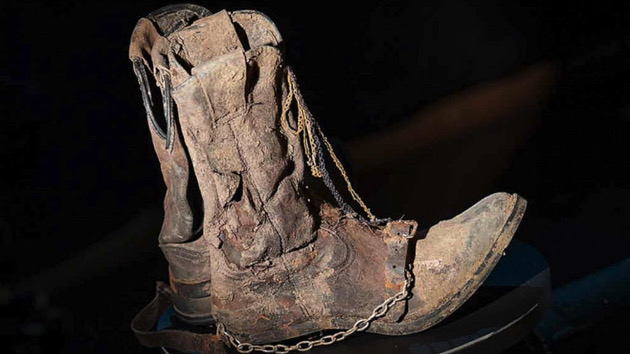 (ESSEX COUNTY, England) — A skeleton found with a pair of cowboy boots three years ago has been identified as a British man who has been missing for over two decades, and local police are now investigating the unsolved case as a possible homicide.

The remains were discovered alongside the boots by a site worker at a scrapyard in the seaside town of St. Osyth in southeast England’s Essex county on April 25, 2019. After years of “extensive investigations,” Essex Police announced Tuesday that they have identified the deceased as William “Bill” Long, who lived in the nearby town of Jaywick and would now be in his 70s.

“The process to identify Bill has been measured and methodical. Bill’s family have been told and they now have the chance to lay him to rest,” Detective Inspector Kevin Hughes of the Kent and Essex Serious Crime Directorate said in a statement. “They have questions about what happened to him and our focus now is to get them answers.”

Investigators believe Long was last seen or thought to be alive between March 1999 and March 2000, and had a girlfriend who moved to Australia at around that time.

At this stage, Long’s death is being investigated as a homicide, according to police.

“We’re keeping an open mind as to what happened to Bill and how he came to be where he was found,” Hughes said. “I need anyone who knew Bill, saw him, spoke to him or has any information about him or his life at the time he was last seen to come forward and speak to my team.”

Long’s sister, Patricia, described him as “vulnerable and an easy target for scammers” and said her family feels “so guilty” for not going to check on him.

“After our father died in 1996, we lost contact with Bill and we’re desperate for information about what happened to him,” she said in a statement released through police. “It’s so difficult to deal with grief and guilt when we don’t know what happened.”

She urged members of the public to “help us with anything you know.”

“If you are afraid and want to remain anonymous,” she added, “this can be arranged.”

Essex Police have set up a special online portal through which information on this case can be reported. Alternatively, people in the United Kingdom can call police by dialling 101 or contact CrimeStoppers anonymously at 0800 555 111.

Ozone layer on track to recover within decades: ‘We need to be vigilant’