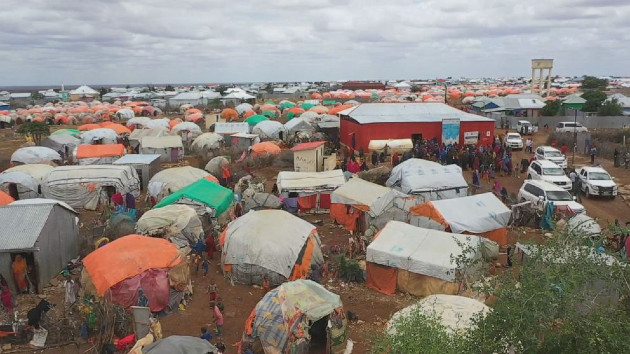 (BAIDOA, Somalia) — At an encampment in Baidoa, Somalia, Garan Hassan tugged at a reporter’s sleeve. Her 18-month-old daughter Malaika was too sick to eat, too weak to cry.

Staff at a Save the Children pediatric nutrition center quickly determined that this toddler had severe acute malnutrition, like more than 500,000 other children in Somalia, according to the U.N. This diagnosis means they could die without immediate treatment.

Malaika’s arm was as thick as a man’s thumb, and she weighed little more than an infant. Her body was shutting down and if left untreated she would likely die.

Somalia, like Ethiopia and Kenya, is suffering a record drought which, coupled with soaring food prices and plummeting donor funding to humanitarian groups, has left more than 22 million people starving, according to the U.N.’s World Food Programme.

More than half of the country’s children face acute malnutrition, Save the Children revealed in a report released on Monday.

The hunger has dislocated over a million Somalis, like Garan Hassan and her family, many of them seeking food and support in the once-small town of Baidoa. It is now a massive sprawl of thousands of tattered tents and home to 600,000 internally displaced people.

Many of them, like Hassan, had to travel through territory controlled by the Islamic fundamentalist group al-Shabab to get there.

Hassan told ABC News her husband died from starvation “at the beginning of the famine.” He was just 32. She is now the sole provider for little Malaika and her six siblings, which is why she told Save the Children staff she could not take Malaika to the hospital — she had to ensure that her other children were cared for.

“For me the declaration of famine is irrelevant. Look around you,” Ebrima Saidy, chief impact officer at Save the Children, told ABC News at the nutrition center where over 200 women with acutely malnourished children hoped to get support, “what is this if this is not famine?”

A famine has not been officially declared in Somalia since 2011.

Aid groups say that after the 2011 famine they had built up the infrastructure to help, but now with donor attention on the war in Ukraine and the COVID-19 pandemic, they lacked the funds.

Famine prevention efforts by the U.N.’s Food and Agriculture Organization go to a million Somalis, but the agency tells ABC News its projects here are only 24% funded.

The next day Save the Children staff visited Garan Hassan and Malaika. They found that another of her siblings had severe acute malnutrition and both children, Malaika and her 3-year-old brother Nadifa, had multiple complications. They had suffered fevers, but were now disturbingly cold to the touch.

The staff warned Hassan they could die if they didn’t get treatment. After a terrifying night, Hassan quickly agreed to go to the hospital.

The children were whisked through the camp to a van that took them along streets broken by neglect and war to the Save the Children stabilization center — basically a hospital for the acutely malnourished.

Hospital staff determined the children suffered from malaria, whooping cough and measles — a result of their immune systems cratering from malnutrition.

During the admission process, as the two children were weighed, and measured and prodded with needles, Nadifa whimpered that he was thirsty. A few minutes later he was propped up on a nurse’s knee and given nutritional formula.

Nadifa drank one cup, then two. A milk mustache formed on his face, and on his mother’s face, for the first time in a long time, a smile.

HOW YOU CAN HELP

Queen Camilla is a mom of two: What to know about her children