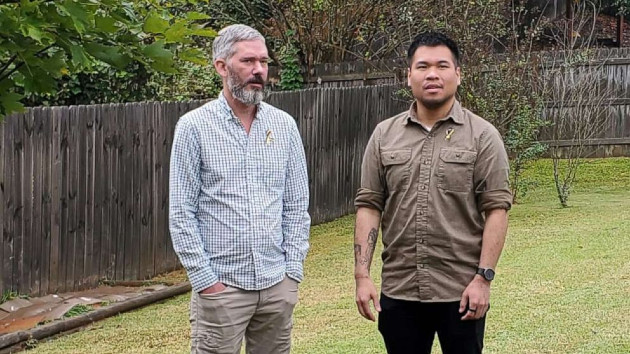 (NEW YORK) — When Alex Drueke and Andy Huynh were captured by Russians in Ukraine over the summer and later held in a “black site” for a month, where the two Alabama men said they endured daily torture and lived on spoiled bread and dirty water, they expected death at any moment.

“I am going to die from this situation, or they are going to kill me,” Drueke said he thought during that time.

In their first broadcast interview together, the two U.S. military veterans told ABC News that, although they were from the same state, they did not know each other when they met in Ukraine, where they had traveled to offer their services, either in humanitarian work or training troops.

“I did not go over there to fight specifically. But I understood that that was a very real possibility,” Drueke said.

What he and Huynh shared, he said, was concern that the Russian invasion of Ukraine would be successful and then spread across Europe.

“We could see that there was a very good possibility this could grow into something much, much larger … We didn’t know how big this was going to get. So it was best to stop it early,” he said.

Drueke, 40, retired from the U.S. Army after 12 years, during which he served two tours of duty in Iraq and ended his career as a platoon sergeant.

Huynh, 27, a Marine who was living outside Huntsville with his girlfriend, was working as a delivery driver and going to school when he watched the invasion on television. Volunteering to fight was justified, he said, to prevent “World War III.”

“It felt wrong just to sit back and do nothing,” he said.

For the following month, the invasion “kept gnawing” at him until he was losing sleep.

“I didn’t want to do nothing. The situation in Ukraine was all I could really think about,” he said.

Both men arrived in Ukraine in early April. They entered the country separately through Poland and, through different circumstances, ended up serving in a unit for Ukraine’s foreign legion. Their capture two months later, on June 9, resulted from a mission gone wrong. Although both men said they would not offer specific details in order to not compromise Ukraine’s ongoing efforts, they said it did take place during a drone reconnaissance mission, which involved scouting areas for intelligence.

“It was very unfortunate how it played out, but just everything went wrong,” and the two men found themselves facing a battalion where a firefight broke out, he said.

They evaded capture for eight hours after running through thick woods where they dodged active drones and land mines they said. Eventually, they said they were surrounded, ordered to their knees, their hands bound, and bags thrust over their heads.

“We were pretty darn sure they were going to execute us right then and there,” Drueke said.

Both men were moved to outposts until they ended up in a “black site,” where they said they were interrogated, beaten, deprived of sleep and forced for hours to sit blindfolded, on their knees, and with their hands across their necks. Drueke’s ribs were forcibly cracked.

What kept them going was thinking of their families. Huynh got engaged days before leaving while Drueke, who is not married, left behind an extended family and his dog, Diesel. While imprisoned, they said their sole objective was to look out for the other person.

The men spent 105 days in captivity before their release in late September, along with eight other foreign-born volunteer fighters from England and Canada and more than 200 Ukrainian soldiers. During their captivity, Russians forced them to make propaganda videos, give interviews to journalists sympathetic to Russia and contact different government agencies in the U.S., including the State Department. Drueke, who his captors chose as the duo’s spokesperson, was allowed to make frequent calls to his family in Tallahatchie. Those calls, Drueke said, were made under duress.

“The guys beating me were in the room with me,” he said.

While being transported, their bodies were stacked on top of one another, they said, along with other prisoners, in the vehicle. In prison, they suffered solitary confinement. Their captors, they said, were wrongly convinced they were spies.

“They wanted to believe that we were something special,” Huynh said.

Now home, the men are inseparable, as are their families, who bonded in their absence. They said they have no regrets and are open to returning to Ukraine to help rebuild once the conflict ends. Drueke said he believes their capture helped the Biden administration open channels to Ukraine that hadn’t been opened yet.

“I hope that we had an impact,” he said.

Civilians remain imprisoned in the same locations they were kept for more than three months.

“We feel guilty that we got traded and they are still there … That’s one of the worst feelings you can have,” Huynh said.

While Ukrainians will need continued humanitarian help for years, they said they’re convinced the country will emerge victorious over Russia.

“[Russian President Vladimir] Putin underestimated them … They are very united as a people. They are not going to give up, no matter what,” Drueke said.