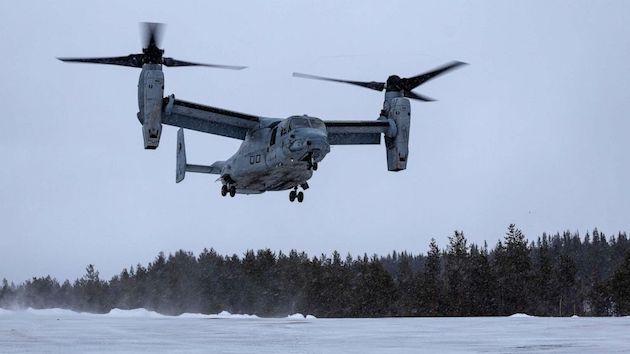 (NEW YORK) — Search and rescue teams in Norway are looking for a missing American MV-22 Osprey aircraft that was taking part in a large NATO military exercise in northern Norway Friday.

There were four Marines aboard the aircraft, Norwegian officials said.

“We can confirm an incident has occurred involving a Marine Corps MV-22B Osprey aircraft,” Maj. Jim Stenger, a U.S. Marine Corps spokesperson said in a statement. “The aircraft was conducting training in Norway as part of Exercise COLD RESPONSE 22 at the time of the incident.”

Held every two years, the exercise was planned long before the Russian invasion of Ukraine and helps to train multinational NATO forces in how to operate in the Arctic.

Norway’s Armed Forces and the Joint Rescue Coordination Centre of Northern Norway issued statements Friday confirming they were conducting a search for a missing Osprey aircraft that had failed to land at its destination.

“The Osprey belongs to the U.S. Marine Corps and is taking part in the Norwegian military exercise Cold Response in Norway,” said the statement from Forsvaret, Norway’s armed forces. “The aircraft has a crew of four and was out on a training mission in Nordland County, northern Norway on Friday 18 March 2022.”

The statement said the Osprey was en route to Bodø, where it was scheduled to land just before 6 p.m. local time and was reported missing at 6:26 p.m. local time with its last known position being south of Bodø.

Search and rescue aircraft were launched but weather conditions in the area are described as “challenging and are expected to get worse.” An apparent crash site south of Bodø was located from the air three hours later.

“Due to the weather conditions, it has not been possible to enter the site from the air,” said the Norwegian armed forces statement. “Police and rescue crews are now on their way into the area.”

This is a developing story. Check back for updates.