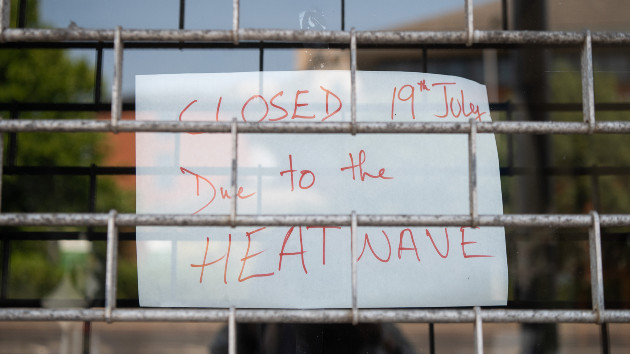 (LONDON) — The U.K. on Tuesday posted its highest temperature on record, breaking 40 degrees Celsius for the first time, after government officials declared a national emergency and issued unprecedented health warnings.

The Met Office earlier on Tuesday had provisionally recorded a record-breaking temperature of 39.1 degrees Celsius (102.38 Fahrenheit) in the village of Charlwood, England. Temperatures are likely to rise throughout the day, they said.

For the first time, the Met Office has issued a “Red warning” in response to the extraordinary heat.

The heat wave in Britain, which has been linked to climate change, follows a weekend of wildfires and soaring deadly temperatures in France, Portugal and Spain.

Thousands have been forced to flee wildfires in southern France and Spain, and more than 1,000 deaths have been linked to the heat wave in Portugal and Spain since earlier in July by the countries’ respective health ministries. France could experience its hottest day on record on Monday, according to local media.

“Nights are also likely to be exceptionally warm, especially in urban areas,” the Met Office’s Chief Meteorologist Paul Gundersen said in a statement. “This is likely to lead to widespread impacts on people and infrastructure. Therefore, it is important people plan for the heat and consider changing their routines. This level of heat can have adverse health effects.”

Government scientists have warned that the frequency, intensity and duration of similar heat waves will increase in the coming century as the world continues to experience the effects of climate change.

“We hoped we wouldn’t get to this situation but for the first time ever we are forecasting greater than 40°C in the U.K.,” Dr. Nikos Christidis, a climate attribution scientist at the Met Office, said. “Climate change has already influenced the likelihood of temperature extremes in the U.K. The chances of seeing 40°C days in the UK could be as much as 10 times more likely in the current climate than under a natural climate unaffected by human influence.”

Despite the heat, schools are expected to remain open. However, there are concerns that U.K. infrastructure is ill-equipped to deal with such weather events. While offices are generally equipped with air-conditioning, only a small number of homes have air-conditioning units.

One Met Office meteorologist, Steven Keates, warned that the heat was not something to celebrate.

“This is not just another heatwave,” Keates told The Telegraph. “This is dangerous heat, because we’re not used to it. It’s simple –our infrastructure is not geared up for weather like this.”

“Do as little as possible,” he added. “Because heat is fatiguing and we are in slightly uncharted territory.”