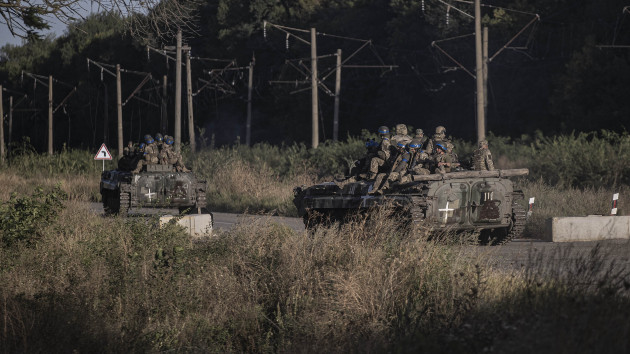 (NEW YORK) — Ukraine’s counteroffensive in its northeast likely marks a turning point in the war and has profound consequences for Russia’s position going forward, according to military analysts.

The counteroffensive has seen Russia’s frontline in the Kharkiv region collapse in less than a week, forcing thousands of its troops to retreat as Ukrainian troops have recaptured hundreds of square miles of territory, officials said.

The defeat not only removes Russia’s ability to threaten Ukraine’s second largest city, Kharkiv, but also likely ends Russia’s ability to mount any major offensives in Ukraine again, the analysts said. It also will have a major knock-on effect on Russia’s capacity to hold its positions on the other fronts around the country. It means in the long-run, the war now favors Ukraine, they said.

“Ukraine has turned the tide of this war in its favor,” the Institute for the Study of War, a Washington D.C.-based think tank that tracks the war closely, wrote in an analysis. “Kyiv will likely increasingly dictate the location and nature of the major fighting, and Russia will find itself increasingly responding inadequately to growing Ukrainian physical and psychological pressure in successive military campaigns unless Moscow finds some way to regain the initiative.”

That does not mean the war will end soon, the ISW wrote — Russia still occupies around a fifth of Ukraine’s territory — and it is likely to continue into 2023, experts said.

The Ukrainian counteroffensive routed a Russian force that had been one pincer in an attempt to seize the whole of the Donbas region, Russian President Vladimir Putin’s minimum declared objective for the war. Ukraine retook the strategic city of Izyum, which had been the headquarters for the Russian effort to advance in Donbas from the north.

Izyum’s seizure means an end to the Russia’s hopes of taking Donbas, the ISW and other analysts said. A second Russian offensive group trying to advance from the south onto the city of Bakhmut has now “lost any real operational significance,” the ISW wrote.

Russian forces were already overstretched as they tried to seize the Donbas region, which made them unable to significantly advance for months, and painfully defending against a Ukrainian counteroffensive in the south, the experts said.

Russia has been unable to replenish its forces because Putin has balked at ordering a full mobilization or putting the country on a war footing, fearing that could lead to domestic unrest that could threaten his rule, officials said. As a result, Russian forces are increasingly numerically inferior to Ukrainian in some areas.

The Russian-appointed head of the Kharkiv region claimed Monday that Russian troops had been outnumbered 8-to-1 during the Ukrainian offensive.

The rout of Russia’s troops in the northeast — that saw them abandon dozens of tanks and vehicles — means it now must redeploy reserves that it does not have to stabilize the front there, experts said.

But moving some of Russia’s troops already deployed on other areas of the front risks giving Ukraine a chance to repeat its Kharkiv offensive elsewhere, hitting places where Russia has thinned its lines, according to the ISW. One potentially vulnerable area is the city of Kherson and the area around it west of the Dniepr river where Ukraine has already made it extremely difficult for Russia to re-supply its forces.

Russia is reeling from the rout in the northeast, its troops’ moral will be badly shaken. The risk for Moscow now is that the failure in the northeast could snowball elsewhere, triggering a domino effect as its forces panic and loses the will to fight, Konrad Muzyka, director of Rochan Consulting, told ABC News.

Without a mass mobilization, that is fraught with huge political risks at home, Russia has no hope of reversing the direction of the war, Muzyka said.

“It’s a horrible position to be in and actually there are no good choices,” he said. “They have to decide. The alternative is losing the war.”

“As a consequence of the north eastern rout of their forces, the Russians now have very few (if any) good choices. Their positions in the east are compromised and require a substantial realignment of defensive lines and logistics,” Mick Ryan, a retired Australian major general and fellow at Center for Strategic and International Studies, wrote on Twitter.

The grim outlook for Russia is shared by Russian nationalist military bloggers, who have large followings on social media and are often embedded with their forces there. The bloggers are the most vehement supporters of the war, but recently have written highly critical posts about the Russian leadership, furious at how the invasion has been conducted.

They have demanded the Kremlin call a full mobilization and put Russia on a war footing, warning it is the only way to reverse the direction of the war.

“Not to recognise that Russia is waging a war is the greatest stupidity,” Yury Kotyenok, who posts under the account Voenkor Kotenok Z, wrote following the retreat in the northeast.

Recriminations over the disaster in northeast Ukraine also erupted unusually on a pro-Kremlin talk show on the channel NTV. Boris Nadezhdin, a politician, told his fellow guests Russia now faced a choice: “Either mobilization and full-scale war, or we get out.”

Has the war in Ukraine reached a turning point?

How much has US military aid helped Ukraine’s stunning offensive?