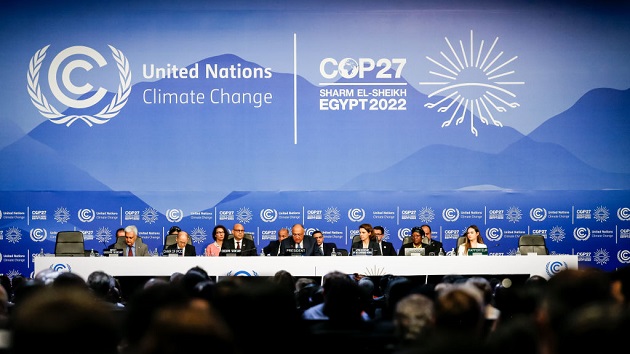 (SHARM EL-SHEIKH, Egypt) — Negotiators from around the world are gathering in Egypt this week for this year’s biggest international climate summit, called COP27.

The United Nations recently warned the world is far from its goal of limiting global warming to 1.5 degrees Celsius warmer than before the industrial revolution, the goal set by the Paris Climate Agreement.

Current policies would lead to 2.8 degrees Celsius of warming by the end of the century, according to the UN Emissions Gap Report, meaning countries need to reduce emissions significantly more to keep the Paris Agreement goal within reach. If every country and private company meets its climate goals, warming could be limited to 1.8 or 1.9 degrees Celsius, but there are still questions about whether enough is being done to make those goals a reality.

“Every degree does matter, 1.5 degrees is the scientific goal of a climate [that] remains stable. After that, things become exponentially more difficult,” Ani Dasgupta, president and CEO of the World Resources Institute, told ABC News.

“So it’s true, that argument the world won’t stop in 2030 if you did or didn’t reach 1.5, but it becomes that much more difficult and that much more risky for human life. So our goal is to be within that.”

Dasgupta said the pressure is more on the largest emitters like the US, Europe, China, and India to be more ambitious because they contribute far more greenhouse gas emissions.

President Joe Biden is scheduled to attend the summit in Egypt and is expected to tout his domestic policy wins on climate this year, including the infrastructure bill and Inflation Reduction Act which included historic amounts of money for clean energy and climate programs.

The meeting takes place with the backdrop of several climate-driven disasters this year, including the devastating flooding in Pakistan and severe drought and famine conditions in East Africa. The world is about 1.2 degrees Celsius higher than the pre-industrial average and experts said this year proves most countries are not prepared for even that amount of warming.

Dasgupta said many of these crises are not just weather disasters but they also bring huge economic impacts, which is one reason there will be so much focus on providing more finance for countries feeling the impacts of climate change.

“This particular year that we are ending, or almost ending, has been devastating in climate-related weather disasters, like a banner year,” he said.

“That is the context of what a 1.2-degree world looks like … so we’ve talked about 1.1, 1.2 [degrees] it always seemed like something you have to imagine. Literally this year you don’t have to imagine, you could just read the newspaper or watch television to see.”

Countries already experiencing dangerous and expensive impacts of climate change, like flooding or food and water insecurity, are expected to pressure wealthier countries like the U.S. to provide more funding to help them adapt or relocate.

This idea known as “loss and damage” financing suggests that countries that contributed emissions that have led to global warming should do more to help communities who contributed less to the problem, but are already feeling the impacts. Special Presidential Envoy for Climate John Kerry said the U.S. is committed to “engaging constructively” to find a way to address the issue but the U.S. has not yet supported a proposal for a new fund for loss and damage.

Kerry, who will represent the US at the summit, says he still believes the world can meet its climate goals but there are still big political and financial challenges to getting it done. Kerry said the transition underway now is bigger than the industrial revolution and will result in a cleaner and more secure energy system.

“While many of us are chagrined it has taken so long for us to get to a place where more and more people are accepting what’s happening, we are there. And the only way to be able to organize ourselves and get the job done when you have 200 or so nations that are involved in this is to come together somewhere and work at it,” he said at a press briefing this week.

The COP27 begins in Sharm el-Sheikh, Egypt on Nov. 6 and is scheduled to conclude Nov. 18.

Trial set to resume this week for David Barnes, American detained in Russia