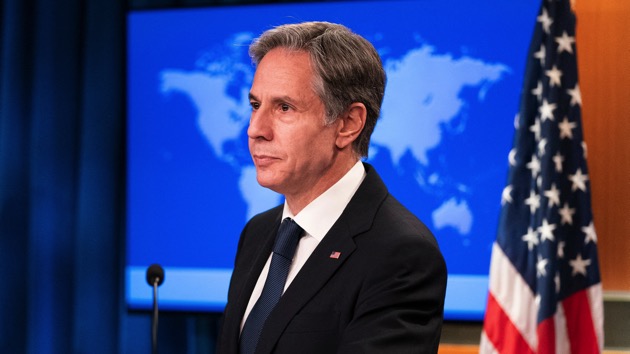 (WASHINGTON) — Secretary of State Antony Blinken said Sunday that the United States was open to discussing limits on missile deployments and troop exercises in Europe during talks with Russia this week over Ukraine.

“There are confidence-building measures, there are risk-reduction measures, all of which, if done reciprocally, I think can really reduce tensions and address concerns,” Blinken told told ABC This Week anchor George Stephanopoulos.

And after Russia sent troops to help quell unrest in neighboring Kazakhstan, Blinken did not rule out that events there could come up in talks — even though Russia has ruled that out.

“That is something I resolutely reject,” Blinken said. “The shoot-to-kill order, to the extent it exists, is wrong and should be rescinded.”

Delegations from the U.S. and Russia planned to hold talksSunday night and Monday in Geneva, kicking off a critical week of diplomacy between Moscow and the West over Russian President Vladimir Putin menacing neighboring Ukraine.

Blinken said it may be possible “to address whatever legitimate concerns Russia may have.”

For example, he said, “there may be grounds for renewing” the Intermediate-Range Nuclear Forces Treaty with Russia, from which the Trump administration withdrew and which the U.S. accuses Russia of violating.

“Similarly, there are agreements on the deployment of conventional forces in Europe, on things like the scope and scale of exercises, that, if adhered to reciprocally — that is, Russia makes good on its commitments, which it’s repeatedly violated — then there are grounds for reducing tensions, creating greater transparency, creating greater confidence, all of which would address concerns that Russia purports to have,” Blinken said.

Blinken said the United States was “not looking at troop levels.”

“When it comes to the deployment of forces and troop levels, we’re not looking at troop levels,” he said. “To the contrary, if Russia commits renewed aggression against Ukraine, I think it’s a very fair prospect that NATO will reinforce its positions along its eastern flank, the countries that border Russia.

“But when it comes to, for example, the scope and scale of exercises,” he continued, “things that were dealt with in the conventional forces in Europe treaty that Russia’s been in violation of, those are things that we can look at.”

The U.S.-Russia negotiations are expected to be followed by talks between Russia and NATO in Brussels on Wednesday and more discussions between the Organization for Security and Co-operation in Europe in Vienna on Thursday. The U.S. will participate in those talks, too.

As President Joe Biden has threatened in the past, Blinken promised “massive consequences” for Russia if it invades Ukraine — promising they would go beyond those that the West imposed on Russia after it annexed Ukraine’s Crimean Peninsula in 2014 — saying the U.S. and European allies have coordinated on “economic, financial and other consequences.”

But when asked by Stephanopoulos whether he thinks Putin has already made the decision to take control of the Ukraine, Blinken noted he wasn’t sure yet.

“It’s clear that we’ve offered him two paths forward,” Blinken said. “One is through diplomacy and dialogue. The other is through deterrents and massive consequences for Russia if it renews its aggression against Ukraine. And we’re about to test the proposition of which path President Putin wants to take this week.”

And the secretary of state tempered expectations about quick results.

“I don’t think we’re going to see any breakthroughs next week,” Blinken said.

It would be “very difficult” to “make actual progress,” he said, as long as “there’s an ongoing escalation, when Russia has a gun to the head of Ukraine with 100,000 troops near its borders, the possibility of doubling that on very short order.”

“If we’re seeing de-escalation, if we’re seeing a reduction in tensions, that is the kind of environment in which we can make real progress and, again, address concerns, reasonable concerns on both sides,” Blinken said.