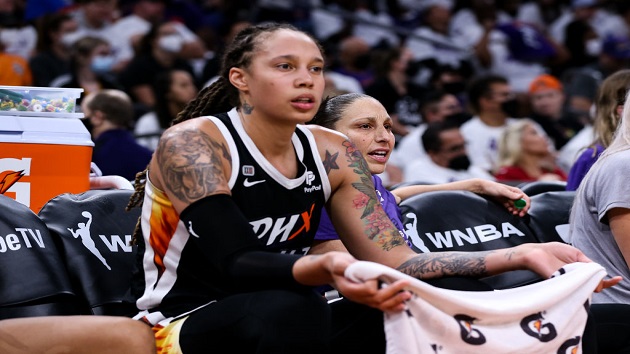 (NEW YORK) — Brittney Griner, the WNBA star held hostage by Russia, has been transferred to a prison camp somewhere in the country, according to her lawyers. It is still unknown which camp Griner has been moved to but testimonies from prisoners, including other Americans, describe the grim conditions she is likely to face there.

Griner had been held in a pre-trial detention center in Moscow since she was detained in February for carrying a small number of vape cartridges containing cannabis oil.

The U.S. has accused Russia of using the incident to trump up large-scale drug smuggling charges against Griner in order to seize her as a political bargaining chip. The upholding of her 9-year sentence late last month by a court meant she is now being transferred to a camp somewhere outside the capital.

The camps, known as penal colonies, are often former Soviet gulag prison camps and inmates are usually kept in crumbling, crowded barracks, sometimes with 50 to 60 sleeping in rows of bunks.

Paul Whelan, the former U.S. Marine held hostage like Griner and imprisoned in a camp for nearly two years, told ABC News in 2020 that conditions there were “Dickensian.”

“It’s pretty grim. Quite dilapidated,” Whelan said then, speaking from prison. “We kind of live on top of each other.”

Prisoners share only a few toilets and are permitted to use a shower only once or twice a week, Whelan said, with no hot water the rest of the time.

Whelan is currently being held in Correctional Colony-17, a camp for foreign prisoners in Mordorvia, a region about 300 miles from Moscow known for its large number of prison camps. Trevor Reed, the other ex-U.S. Marine who was released in a prisoner swap earlier this year after 986 days in detention, was kept in a neighboring camp.

Griner will also almost certainly be sent to a prison camp for foreign female inmates.

Whelan said the barracks are often cold in winter as temperatures fall far below freezing outside and many prisoners are sick. Medical treatment in the camps is minimal, with prisoners routinely reporting being denied requests to see doctors for weeks and often deprived of medication to treat chronic conditions.

Inmates are obliged to work in the camps, most often sewing clothes or manufacturing other goods, including sometimes tourist souvenirs. Prisoners work eight hours a-day — sometimes more — in conditions recalling sweatshops and receive a few dollars each month for their labor.

A normal day, according to Whelan, sees prisoners wake up at 6 a.m. and brought to do 15 minutes of physical exercise on the parade ground before starting their work shifts.

Endemic physical torture is well-documented in Russian prisons, but most experts believe that high-profile detainees like Griner will be shielded from it because it would undermine their usefulness as bargaining chips and embarrass authorities.

Both Reed and Whelan said they were protected from physical violence but were subjected to solitary confinement and other forms of psychological pressure. Reed told ABC News in May he spent repeated 15-day stints in an isolation cell as punishment for his refusal to work for his captors. Inmates are forbidden from lying down or sometimes even from sitting during daylight hours in those cells, which are usually only a few meters in size and sometimes have holes in the floor for toilets.

Whelan has been placed on an escape watch list, meaning that every night for years he has been woken up every two hours with a flashlight shone in his face to register he is still there, according to his family.

Other political prisoners have described being sent to solitary confinement for infractions as minor as an unbuttoned uniform.

Despite the camp’s conditions, some prisoners have said they are still an improvement on those in pre-trial detention centers, where prisoners are kept in their cells almost 24-hours a day.

Guards are not posted in the barracks themselves and, in practice, much of the daily prison life is organized by criminal gangs who oversee order in the barracks, current and former prisoners have told ABC News. Reed and Whelan have both described being treated generally well by their fellow inmates.

“Everybody works together as a team, so there is kind of a bit of a brotherhood,” Whelan told ABC in 2020. “The guards call me ‘Tourist,"” he said.

Reed said his frequent clashes with the prison authorities had won him respect among other prisoners.

“I was consistently fighting and resisting the government there,” he said. “The prisoners inside of the Russian prison, the criminal element there, they respected that.”

By law, prisoners should be permitted to speak to their families regularly by phone but prison authorities frequently restricted Reed and Whelan’s communications for long stretches, withholding letters and phone calls sometimes for weeks, and also preventing them for communicating with the U.S. embassy. Whelan in recent months has been able to speak by phone most weeks with his parents.

Maria Alyokhina, a member of the anti-Kremlin art group Pussy Riot, who spent a year and a half in a camp for a 2012 protest in a cathedral, told Reuters this week that Griner’s supporters should write letters to her.

“Do not leave someone alone with this system,” she said.