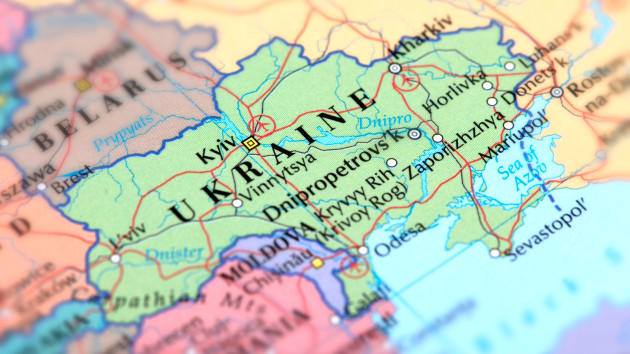 (NEW YORK) — Ukrainian President Volodymyr Zelenskyy accused Russia of committing genocide after he said hundreds of civilians were found dead in the town of Bucha following the Russian military’s withdrawal.

Ukrainian officials have said more than 400 civilians were killed in Bucha, many with hands tied behind their backs, shot at close range.

Russia’s defense ministry said in a statement Sunday that all photographs and videos published by the Ukrainian authorities alleging “crimes” by Russian troops in Bucha were a “provocation” and claimed no resident of Bucha suffered violence at the hands of Russian troops.

Russia has claimed all its units withdrew completely from Bucha around March 30. An ABC News analysis of videos and satellite imagery confirms some of the bodies seen lying in the streets of Bucha were there as early as March 19, when the town was still occupied by Russian forces, contradicting Russia’s claims that the scene was “staged” after its troops left.

President Joe Biden called Russian President Vladimir Putin a war criminal and the alleged acts committed by Russian troops “war crimes,” but fell short of calling it genocide. Experts say this could, in part, be a political decision.

“To say that a genocide is occurring, is also to say, we can’t sit on our hands and do nothing here,” David Simon, a senior lecturer and the director of the Genocide Studies program at Yale University, told ABC News.

The U.S. government also has an internal process for designating whether genocide has occurred. It took the State Department five years to designate that a genocide had occurred in Myanmar, Simon said.

This story explains the legal term “genocide” in relation to the war in Ukraine.

Genocide is defined as an act “committed with intent to destroy, in whole or in part, a national, ethnical, racial or religious group,” according to the United Nations’ Convention on the Prevention and Punishment of the Crime of Genocide.

Acts of genocide against members of a group listed in the convention include killings; causing them serious bodily or mental harm; deliberately inflicting life conditions calculated to being about its physical destruction; imposing measures to prevent births; or forcibly transferring children of the group to another group.

Genocide is not just any large scale violence, or violence that becomes particularly gruesome or grisly, Simon said. There has to be intent by the perpetrators to destroy the group, he said.

Killings are also not the only form of genocide that could have occurred in Ukraine, another expert said.

“Other attempts to diminish the group, by placing them in harsh conditions of life, like if you think about starving a group to death, and you actually think of some cities in Ukraine today, where through bombardment and cutting off the flow of humanitarian aid, people are potentially going to be starving,” Alex Hinton, the director of the Center for the Study of Genocide and Human Rights and UNESCO Chair on Genocide Prevention, told ABC News.

Whether or not these violent acts allegedly committed by Russian forces against civilians are found to be acts of genocide, they are illegal under international law and warrant a response from the international community, Simon said.

The legal definition of genocide does not define a threshold for an amount of violence that has to have happened in order for it to be considered genocide.

“The importance of intent within the definition of genocide means really, that there is no legal threshold. Particularly because the convention says the ‘intent destroy in whole or in part’,” Simon said.

In practice, though, Simon said the possibility of genocide has usually come up when the number of deaths are in the thousands.

As of Wednesday, at least 1,480 civilians have been killed and 2,195 others have been injured in Ukraine since Russian forces invaded on Feb. 24, according to the United Nations High Commissioner for Human Rights.

The U.N.’s convention on genocide tells countries to take claims to one of the organs of the United Nations for the further prevention and suppression of acts of genocide. However, with Russia’s veto power, it is unlikely the Security Council, the organ primarily responsible for ensuring international peace and security, would be able to take action, Simon said.

There are a number of things states or geopolitical actors can do, Hinton said.

Organizations, including Human Rights Watch, and government actors are currently on the ground gathering evidence for a possible trial of those who may have committed crimes. An inquiry could also be launched to investigate the alleged war crimes committed.

The International Criminal Court has begun active investigations into potential war crimes committed, but Simon said it could take years for this to be litigated.

“In most cases, the ICC is able to act only after a conflict is essentially over,” Simon said.

The ICC’s investigation into crimes committed in Myanmar is still primarily in the investigation phase, despite the most intense parts of the violence happening in 2017, Simon said.

Investigators will need to prove it was Russia’s intent to destroy Ukraine or Ukrainians as a group. This evidence would be any articulation of the idea on social media, public broadcasts, in writing or even private communications, Simon said.

But, “there can be no actual case until those individuals that are under warrant are arrested and brought to the Hague for trial,” Simon said.

Radovan Karadzic, who committed war crimes in the former Yugoslavia during 1992 and 1993, and was convicted in the ICC, was at large until 2008.

“His trial, which included genocide charges, took place something like a decade and a half after the acts he undertook,” Simon said.

This violence could push actors to take a stronger stance against Russia, which could have included military action if Russia wasn’t a nuclear power, Simon said.

Biden has repeatedly said American troops will not join the war in Ukraine, warning that going head-to-head would lead to “World War III.” Biden has also denied requests from Zelenskyy for a no-fly zone over Ukraine.

“But it may push Europeans to have more of a taste to expand sanctions to include Russian exports of gas and oil, which could be far more devastating to the Russian economy than the sanctions that are in place up to this point,” Simon said.

Hinton agreed that additional sanctions could be imposed, but said lines of diplomacy need to be kept open, Hinton said.

“There has to be a way to get out of the conflict, so diplomacy is absolutely critical,” Hinton said.

Ukraine proposed a new system of security guarantees similar to NATO’s collective defense clause which would legally require “guarantor countries” to provide arms and impose a “no-fly” zone over Ukraine, in the event of an attack.

Simon said the term “genocide” can often be used politically, to describe crimes that do not fit its legal definition.

“People tend to use genocide as a label for anything that upsets them. Indeed, the Russians have used Neo-Nazis and genocide against Russians as the pretext for invading in the first place, when there’s absolutely no evidence of anything, especially intent to destroy Russians within Ukraine,” Simon said.

Hinton agreed, saying, “genocide has always from the very beginning, been a sort of political football. It’s used and misused by states to serve their interest.”

A designation that the crimes committed against Ukrainian civilians amounts to genocide should not make a difference in the response, according to Simon.

“There are clearly violations of international law that are causing great harm to civilian populations. And that alone should should trigger a stronger response,” he said.

“We have enough evidence of crimes against humanity, that if we think that mass atrocities are a reason for ratcheting up pressure, militarily or otherwise, against the perpetrator force, we have that evidence with us now and we don’t need to have a determination of genocide to decide whether or not we find bodies in the street of Bucha repulsive or revolting,” Simon said.

US leaning toward sending Abrams tanks to Ukraine, officials say