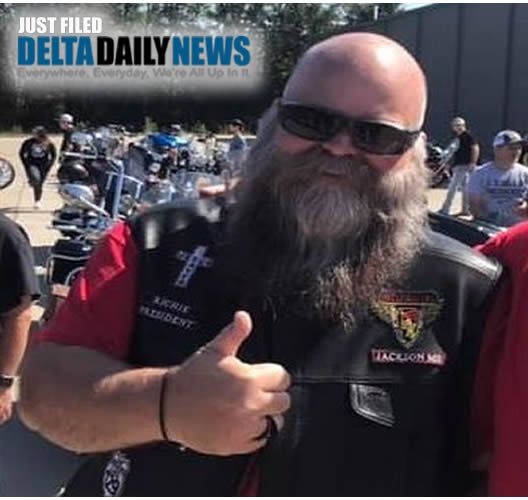 BRANDON, Miss. (WKRG/BIKER DAD) – “Richie Jones was a big teddy bear,” Chad Miley tells me during a telephone call, just a few days after his friend died in a motorcycle crash on a Mississippi highway. Jones was like many of us bikers, looked like one of the big bearded stereotype characters of Hollywood biker movies. But, on the inside he wasn’t the tough guy. He was the nice guy. It’s a common theme in the real world of the motorcycle community. But, beyond that, there seemed to be nothing common about Jones.

The president of the Jackson Unit of the Hellfighters Motorcycle Ministry was doing two of things he loved most in life, riding his motorcycle and going to church. But he never made it to Life Church in Brandon, Mississippi Sunday. That’s because, Miley tells me, “it happened on 471 in Brandon, an elderly woman pulled out in front of him at a stop sign.” Miley is the vice president of the chapter, well they actually call themselves a unit he says because, “we are a nationwide organization. We are a go and tell ministry. We go everywhere and tell as many people as possible about Jesus.”

The national organization also just lost its founder, Richard Headrick. He died of cancer at 77 according to the Leader-Call newspaper.

As for Richie Jones, “he was a big guy,” Miley told me, “his heart was probably the biggest thing on him besides his beard, which he took pride in by the way. He had a knack to see the whole picture of a person.”

The two have been friends since 1995. Jones was a drummer, Miley says, “he was one of the best drummers you ever heard who didn’t get paid to do it. He was manager of Mississippi Music for about 20 years.. when he got saved, really got involved in church and the Hellfighters, he played church in the worship band.”

He was married. He had 2 sons and several step kids.

Hellfighters International is well-known amongst bikers in the South, not just for their ministry, but for the Hellfighters USA motorcycle shop in Laurel, MS. It’s an 80,000 square foot dealership, shop and swap meet. It’s a really cool place. “Everything started in Laurel, now we have a bunch of units nationwide. The national headquarters is there, it’s the epicenter,” says Miley.

The Hellfighters shared a video of Jones back in March. He held a virtual “patch-in” ceremony for new members because of COVID-19. Then, they eventually had a real-life ceremony when Mississippi began to open back up. The Hellfighters shop is back open too, with proper social distancing.

But what it always comes back to is motorcycles, and more importantly, the ministry, “his favorite thing to say was ‘keep the main thing the main thing.’ The main thing is Jesus. Keep him front and center and everything else will fall into place.”

President Donald Trump Is Itching To Get Back Out Onto The Campaign Trail.